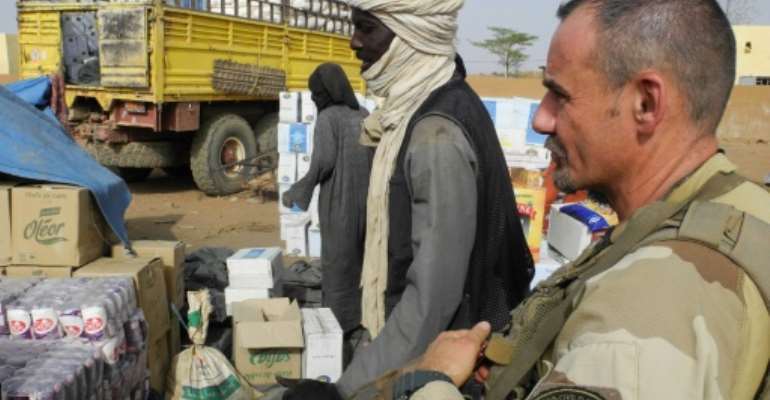 The presence of foreign soldiers has displeased some Burkinabes. By DaphnÃ© BENOIT (AFP/File)

Armed men stormed a mosque in the volatile north of Burkina Faso as worshippers were at prayer, killing 16 people and sending residents fleeing, security sources and locals said Saturday.

The attack on the Grand Mosque in the town of Salmossi on Friday evening underscores the difficulties faced by the country in its battle against jihadists.

One source said 13 people died on the spot and three succumbed to their injuries later. Two of the wounded are in critical condition.

"Since this morning, people have started to flee the area," one resident from the nearby town of Gorom-Gorom said.

He said there was a "climate of panic despite military reinforcements" that were deployed after the deadly attack.

Although hit by jihadist violence, many Burkinabes oppose the presence of foreign troops -- notably from former colonial ruler France -- on their territory.

On Saturday, a crowd of about 1,000 people marched in the capital Ouagadougou "to denounce terrorism and the presence of foreign military bases in Africa."

"Terrorism has now become an ideal pretext for installing foreign military bases in our country," said Gabin Korbeogo, one of co-organisers of the march.

"The French, American, Canadian, German and other armies have set foot in our sub-region, saying they want to fight terrorism. But despite this massive presence... the terrorist groups... are growing stronger."

Until 2015, the poor West African country Burkina Faso was largely spared violence that hit Mali and then Niger, its neighbours to the north.

But jihadists -- some linked to Al-Qaeda, others to the so-called Islamic State group -- started infiltrating the north, then the east, and then endangered the southern and western borders of the landlocked country.

Combining guerrilla hit-and-run tactics with road mines and suicide bombings, the insurgents have killed nearly 600 people, according to a toll compiled by AFP.

Civil society groups put the number at more than 1,000, with attacks no taking place on almost a daily basis.

Burkina's defence and security forces are badly-equipped, poorly trained and have shown themselves to be unable to put a halt to the increasing violence.

France has a force of 200 in Burkina Faso but also intervenes frequently as part of its regional Barkhane operation.

Almost 500,000 people have fled their homes because of the violence, according to the UN refugee agency, which has warned of a humanitarian crisis affecting 1.5 million people.

Almost 3,000 schools have closed, and the impact on an overwhelmingly rural economy is escalating, disrupting trade and markets.