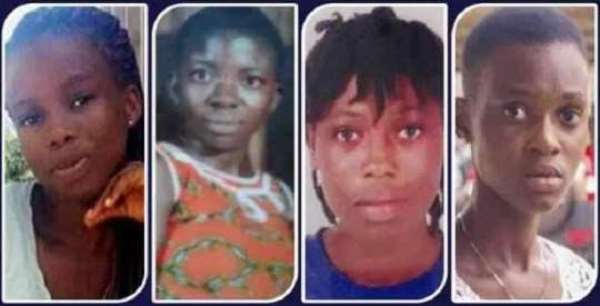 Family of one of the three kidnapped girls has said liaison officers appointed to keep the families updated with investigations on the case never gave them a face.

A spokesperson for the family, Rebecca Quayeson said the liaison officers had failed to offer useful information to the family since their appointment.

“Since the first day that they introduced the liason officer to us, they have not done anything. They have refused to call family members. There is no information. It is like they are not giving us the respect that we need. They are treating us like animals,” she said.

Rebecca made this known while expressing her frustration over the Police’s unwillingness to release the remains of the kidnapped girls for independent investigations.

Rebecca on Eyewitness News reiterated the need for the remains to be released, saying “they have to release the bones to us if they are saying indeed they are that of the girls.”

Meanwhile, one other family has accepted the Police results on the DNA test.

Michael Korankye, spokesperson for the family arrived at the decision after extensive deliberation.

“We belong to a bigger family. Since this issue came, it has been nine months now. We have gone through a lot as a family. We have done all that we can to assist the Police in bringing the girls. Unfortunately, in August, the Police said they found some bones and that will be the remains of the girls and lo and behold the DNA test was run. The only result that came out was that it was the girls so the family sat and upon further deliberation, we decided that we are moving on. We do not have the power to run another test. The Police are in control and the results they are giving us is that the girls are dead so we will go for the remains and bury it,” he said.

The missing girls were declared dead by police on August 15, 2019.

The victims, Priscilla Bentum, Ruth Love Quayson, Priscilla Mantebea Kuranchie and Ruth Abakah were kidnapped in Takoradi in the Western Region between July and December 2018.

Three human parts were found in a sewage system in Takoradi near the home of the main suspect in the case.

Police also later found a fourth set of human remains at Nkroful new site at Takoradi as part of their investigations drawing the family of another missing person, Ruth Abakah, into the case.

Samuel Udoetuk-Wills, the main suspect in the case, is already serving an 18-months sentence for escaping from jail after his initial arrest in connection with the kidnappings.