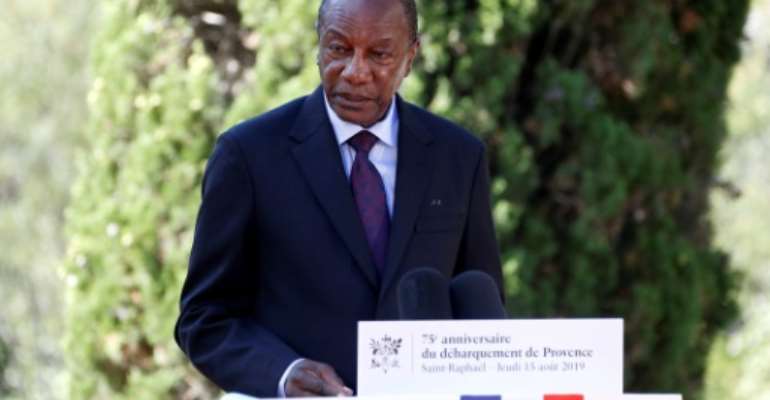 Last month Conde, 81, called on the public to prepare for a referendum and elections, sparking speculation that he was planning to overcome a constitutional ban on a third term in office. By ERIC GAILLARD (POOL/AFP)

An opposition coalition in Guinea on Monday called for demonstrations from October 14 despite a government crackdown on protests after President Alpha Conde sparked speculation he would seek a controversial third term.

Last month Conde, 81, called on the public to prepare for a referendum and elections, stirring talk that he was planning to overcome a constitutional ban on a third term in office.

Conde is a former opposition figure who came to power in 2010, becoming the first democratically-elected president of Guinea, an impoverished former French colony in West Africa.

He was re-elected five years later but has questioned two-term limits and cracked down on protests against him seeking another term.

He has attracted criticism for deadly use of gunfire by police to quell demonstrations. Scores have been killed, according to the opposition.

Conde has not publicly called for constitutional change, although last month he tasked Prime Minister Ibrahima Kassory Fofana with staging wide-ranging "consultations" on the national charter.

In a declaration published on Monday following an extraordinary meeting, the opposition coalition FNDC said it was "delighted" not to have taken part in the process.

It called it a "masquerade disguised under the label of consultations which was just a new delaying tactic intended to serve as an excuse to legitimise the process of constitutional coup undertaken by the Guinean authorities".

The opposition umbrella group -- the National Front for the Defence of the Constitution (FNDC) -- was formed in April by the main opposition parties, civil society associations and trade unions to oppose a possible third term.

The coalition added that it was "calling for all Guineans" to mobilise by demonstrating from October 14.

Conde's second term -- the maximum under the present constitution -- expires in October 2020.

Legislative elections should have been held last year, but were indefinitely postponed.

Conde has called for them to be held by the end of the year.

Human Rights Watch has meanwhile called on Conde to ensure opposition parties' right to protest saying "a blanket ban" on demonstrations was not "a proportionate response to the risk of violence during protests".

"The government of Guinea has effectively banned street protests for more than a year, citing threats to public security. Local authorities have prohibited at least 20 political or other demonstrations," it said in a statement.

"Security forces have tear gassed those who defy the ban, and arrested dozens of demonstrators."

HRW West Africa director Corinne Dufka said the right to peaceful protest was "a fundamental pillar of democratic governance", adding that "the Guinean government should act quickly to find a way to respect the right to protest while protecting public safety".