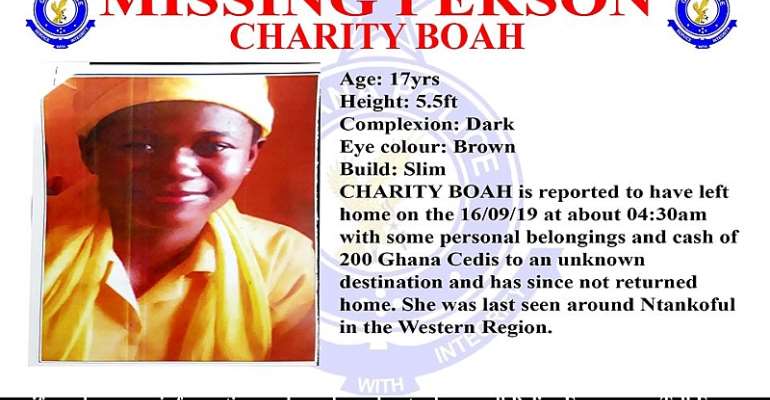 The family of Charity Boah, one of the five newly reported Takoradi missing persons have appealed for help in finding the missing relative.

Police in the Western Region on Friday announced the disappearance of the five persons in the region, all cases reported in the month of September alone.

Kwaku Boah who is the father of the 17-year-old girl, Charity, informed Citi News that it's been three weeks since his daughter got missing.

“My child used to stay with someone who was assisting her with school but due to financial difficulty, we had to move her to a different place at Ntankoful. On Sunday, the 15th of September, I saw her off to board a bus. Though she was supposed to arrive on the same day, we were only informed five days later that she had still not arrived. We were alarmed and went to inform the Police about the issue,” he lamented.

“The Police have so far been investigating the matter and have asked us for our cooperation. I am appealing to everyone to help me find my child,” he pleaded.

Meanwhile, the Police have found three out of the five missing persons; Fauzia Aliu, Augustina Koomson and Rosina Gyekyewaa.

The announcement was made in a statement on the Ghana Police Service's Facebook page on Sunday.

Investigations are still underway in finding the other two – Charity Boah and Kwame Krah.