Malawi's public protector on crusade to clean up government 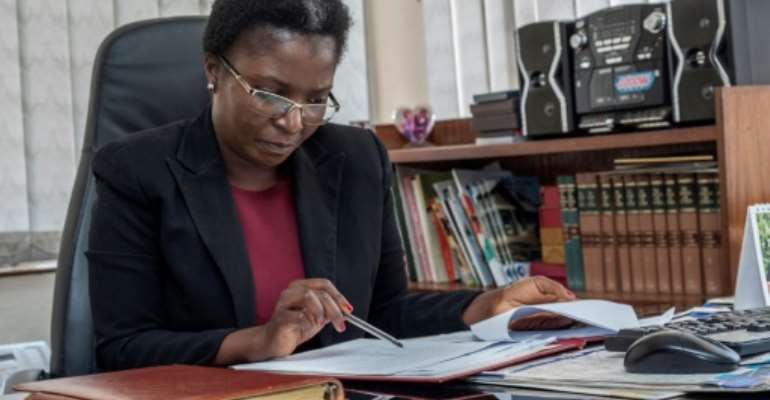 Chizuma's strength is her "knowledge and understanding of the law... and making decisions that are in the best interest of the public," said Martha Kaukonde, the honorary secretary of the Malawi Law Society. By AMOS GUMULIRA (AFP)

The battle against corruption in the poor southern African state of Malawi has turned a shy, diminutive omsbudswoman, Martha Chizuma, into a popular icon.

The quietly confident former magistrate and registrar of the High Court, appointed public protector in December 2015 when she was only 36, is the youngest person and only the second woman to hold the office.

"There have been moments when you have had those you are dealing with or investigating looking down on me because of my age and gender," the bespectacled mother of three told AFP.

"Whenever I am confronted with such people I find myself feeling sorry for them, because in this day and age where you have females and young people literally transforming the world for the better, their attitude means that they have nothing else to offer besides their bigotry," she said.

Chizuma's journey has taken her to the front lines of the war against misgovernment and impunity that is rampant in aid-dependent Malawi.

"I have always argued that maladministration, coupled with the attendant impunity, is the soil, fertiliser and the rain on which foundations or systems of corruption are built," she said.

Chizuma has uncovered a range of abuses.

In August, one of her probes revealed that 160 women had their uteruses removed between January and July 2018 because of negligence.

Another inquiry found that around 250 pieces of archaic farm equipment were bought and abandoned following a $50 million (45 million euro) loan from India in 2011.

The scam, dubbed "Tractorgate", led the government to sell all the equipment, including 177 Sonalika tractors, to private individuals and farmers at below their purchase price.

Although no one has been prosecuted, the ombudswoman has already obtained a rare public apology from the agriculture ministry.

"Every time I have used the law to bring about justice to anyone who has been ill-treated by the government system it is a point of pride for me," Chizuma said.

But her successes have sparked threats and a smear campaign tarring her as corrupt, allegations that she has defiantly rejected.

Government spokesman Mark Botoman warned Chizuma against "abusing" her position, warning that any ombudsman should be "accountable to the people and to the law."

Chizuma has been widely praised for her courage.

Lazarus Chakwera, leader of the largest opposition Malawi Congress Party, told AFP that she would go down in history as "one of the shining lights of integrity on top of a hill in whose valleys remain the dark shadows of institutional corruption and impunity across the public sector".

Chizuma's strength is her "knowledge and understanding of the law... and making decisions that are in the best interest of the public," said Martha Kaukonde, honorary secretary of the Malawi Law Society.

"She has mimicked the same ruthless efficiency and determination of Thuli Madonsela, her former South African counterpart who is lauded for her successful tenure famous for prosecuting abuse of power under then president Jacob Zuma," Golden Matonga, a blogger and investigative journalist, told AFP.

In recognition of her tenacity, Chizuma was elected a director of the International Ombudsman Institute. She also serves as the treasurer general of the African Ombudsman and Mediators Association.