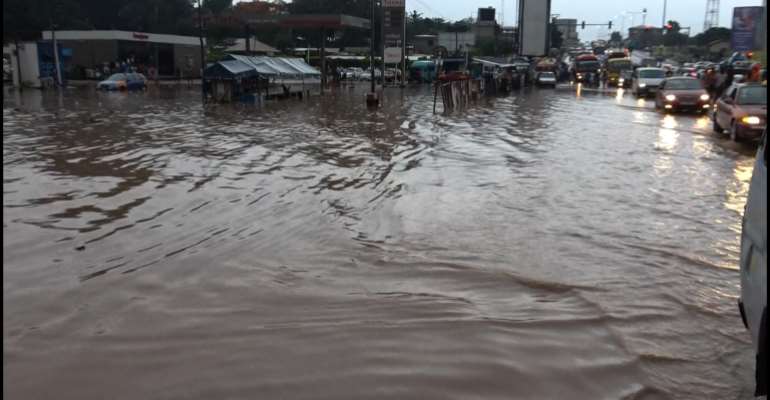 Two days after being displaced by floods, some residents of Asuboni Rails in the Kwahu West Municipality of the Eastern Region, are yet to receive relief items from the National Disaster Management Organisation (NADMO).

According to the Director of the Eastern Regional NADMO, Kwame Appiah Koduah, his office is currently out of stock of items, therefore they are waiting on a timely response from the head office in Accra.

“We are working around the clock to deliver the items. As at now we don't have stock at the regional secretariat but we have sent the request to Accra. Hopefully, between tomorrow and the following day, we will receive a positive response,” he said.

He assured the victims of calm and security.
“We have taken care of all those things as at now. There is the presence of security and we hope that the needs of the people will be attended to immediately,” he added.

Two days ago, a downpour caused some 1,200 residents of Asuboni Rails in the Kwahu West Municipality of the Eastern Region to be displaced following the heavy rainfall.

The 7-hour downpour destroyed some 50 homes forcing residents to take refuge in a church building.

Flooding is an annual problem and a key source of human vulnerability in the country.

The perceived and actual causes of flood hazards have come under tremendous debate in recent times.

Studies carried out on flood vulnerability in the city have given varied attributions to their frequent occurrences. .

Though some people tend to blame the government for the floods, stakeholders and civil organizations have asked citizens who discard refuse into drains, throw rubbish from moving vehicles, abandon construction waste to gradually find its way into drains, and build houses in waterways to desist from these acts to help curb the recurrent problem.

Treason trial: Bomb the ministry for transmission to go off ...
7 minutes ago

Kumasi: Lady denied recruitment into GNFS because of stretch...
7 minutes ago