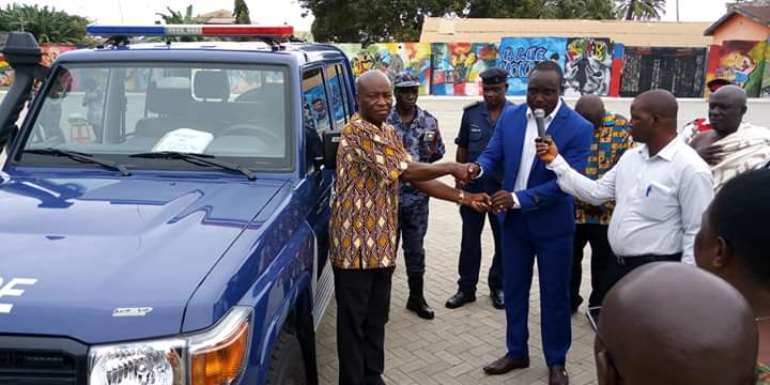 The MCE obtained the vehicle for the Police Administration and presented it on behalf of the Inspector General of Police.

Handing over the vehicle to the Command at Axim on Wednesday, October 2, 2019, the MCE disclosed that the Member of Parliament for the area, Catherine Afeku promised the Command last year to lobby to get them a brand new vehicle to be used to combat crime.

He urged the Command and the people of Nzema East to thank the MP for her lobbying skills.

The MCE said the MP had the security of the area at heart and urged the Constituents to rally behind her.

He also commended the Akufo-Addo-led government for thinking about the welfare of the people in the municipality.

He disclosed that when it comes to the security of this country, the Akufo-Addo-led government has performed better than any government.

He said since President Akufo-Addo assumed office, he has supported the Ghana Police Service with over 200 vehicles.

The MCE assured the Command that the Akufo-Addo-led government would continue to resource them to be effective in fighting against crime.

He, therefore seized the opportunity to appeal to the Command to be proactive in the discharge of their duties and not to rely on only receiving of complaints from the people.

He also appealed to them to maintain the vehicle to last longer to achieve its intended purpose.

He disclosed that very soon the Command would get a substantive District Police Commander.

Receiving the keys on behalf of the Nzema East District Police Command, the Axim Divisional Crime Officer, Supt. Lawrence Gbele thanked the MCE and government for the kind gesture and pledged to maintain the vehicle to last longer.

He said this vehicle would motivate them to work harder to reduce criminal activities in the area.

He, therefore charged the people to be law-abiding and report any criminal around them to the police for immediate arrest.

He seized the opportunity to appeal to government to increase personnel in the area.

Even if Nana-Addo changes constitution and contest, Mahama w...
57 minutes ago