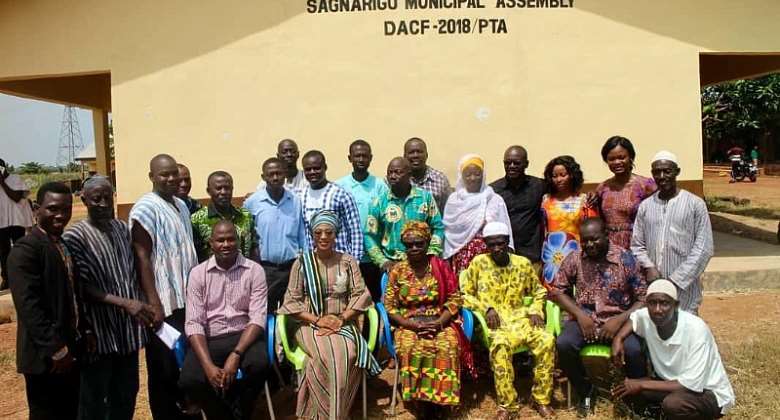 The MCE (middle) with some parents and teachers

The project was initiated by the Parent Teacher Association (PTA) of the school and completed by the municipal assembly. Besides, the MCE commissioned two additional schools in the municipality.

The Sagnarigu MCE commended the PTA of the Kanvilli R/C Primary for initiating the project. He encouraged parents in other schools to emulate the worthy example.

“The Sagnarigu Assembly sees the need to improve educational infrastructure to ensure that our children get quality foundation in education. That is why we have supported the school to complete the project,” she said and appealed passionately to the management of the school to maintain the structure for other children to benefit from it.

The MCE gave an assurance that the Akufo-Addo administration was committed to ensuring that the future of Ghanaian children was not put in jeopardy.

The MCE said education is a shared responsibility and called on parents to play a leading role in bringing up children to become responsible adults.

She said the Sagnarigu Assembly would support teachers to organize extra classes for junior high school students in the municipality during holidays to prepare them better for exams.

The Sagnarigu Municipal Education Director, Humu Imoro, commended the assembly for completing the classroom blocks, and gave an assurance that they would make good use of the building for the benefit of the children.

He said teaching and learning cannot be effective without basic infrastructure. He added that the school would improve on its results as a way of showing their appreciation for the kind gesture.