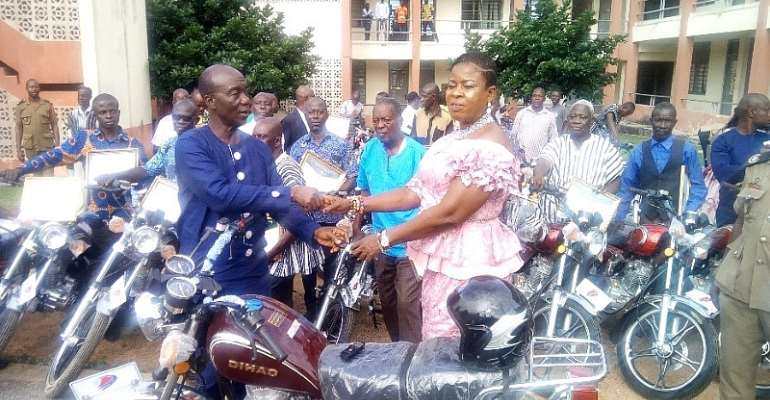 Hon. Kena handing the bikes over to the PM, Hon.Kate Mawusi

The motorbikes, 45 in total was presented to the Assembly members during the last General Assembly Meeting of the current members before dissolution of the house on the 7th of October, 2019. The DCE appealed to the assembly members to use the bikes for the intended purpose and refrain from selling them for personal gain. They are to use them to serve their communities. Mr. Kena appealed to them to at all times put on the helmets and avoid reckless riding of the bikes as the rate of motor accidents in the district was already a source of concern to the people.

He thanked the Assembly members for their patience as the issue of the bikes had always been a bone of contention between the Assembly members and the Management of the District despite assurances by the DCE. Members of the Assembly had threatened to boycott sitting on one occasion because of the absence of the motorbikes.

The Presiding Member for the Kwahu Afram Plains North District Assembly, Hon. Kate Mawusi Babanawo thanked the DCE for the gesture and assured that the motorbikes would be used by the Assembly members to aid their work in their communities. She expressed her appreciation to the Management for fueling the motor bikes as well. The members were later presented with certificates of service.