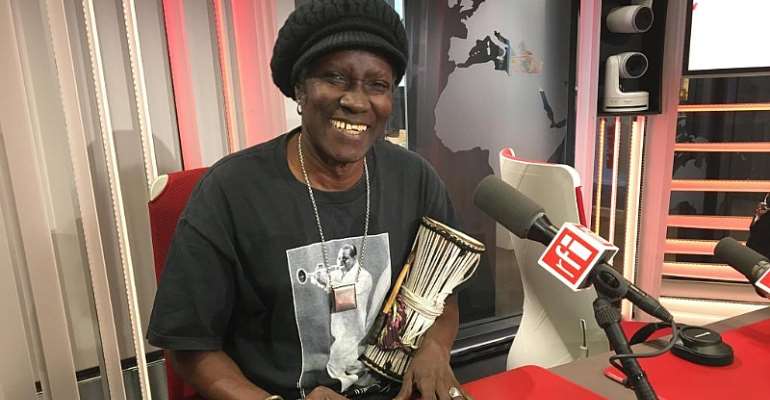 Abdou Mboup's skills as a percussionist and kora player have led to collaborations with the likes of Johnny Clegg, Claude Nougaro, Nina Simone and Michel Pettruciani. After 25 years in the U.S. he's returned to France to build his career in Europe. He talks to RFI about his new album African Lullaby and the role of the tami (talking drum) in his native griot culture in Senegal. "I like to call it our cell phone," he says.

Mboup grew up in a griot family in Kebemer, north Senegal, playing the drums in the courtyard from the age of three "like every griot kid”.

The tami (talking drum) was used to spread messages from village to village.

“Whatever the rhythm people could understand [whether] it was about a wedding, death or a snake biting someone. That's why I've always said it was our cell phone.”

His uncles were master drummers, his grandmother an accomplished singer, and he went on to join Xalam, Senegal's top band in the 1970s.

“I was the first musician to incorporate the African percussion into mbalax [a popular dance music]," Mboup remembers. "I composed the first hit in the history of mbalax," it was Daida, with Xalam," in 1975.

The need to explore other music
Mboup didn't want to restrict himself to one genre and in 1995 he left for the U.S. where he ventured into funk, fusion, jazz and world music.

“I don't want to repeat myself, I have to go and explore other music,” he explains. "Some people called my music Afro-fusion, others called it Afro-jazz, my way is to mix everything together.”

His openness, inventiveness and sheer energy when drumming has led to collaborations with an array of top singers and musicians: Claude Nougaro, Nina Simone, Johnny Clegg, Michel Pettruciani, Harry Belafonte, Jon Hassel.. but to mention a few.

Mboup recognises working with such a broad range of people has expanded his own musical culture, but why did they turn to him?

Nougaro described Mboup as "a percussion genius"; Johnny Clegg was impressed by the many ways he expressed rhythm. After frosty beginnings in concert with Nina Simone in 1972 in Paris, even she came to appreciate his talent.

Perhaps his griot ancestry is part of the explanation.

An African Lullaby to be shared, not put you to sleep

After 25 years in the U.S. and “feeling a bit tired of America” Mboup has returned to France and settled in outside the capital, in Orleans.

Mboup plays kora (21-string harp), xalam (five-string African banjo) and percussion. And he sings in Wolof and in English.

"I'm reporting social injustice, corruption,” says Mboup the songwriter, "I think when people buy your music, listen to your music, you should talk about their concerns."

One such concern is the abuse of power at the highest level of government on the African continent, a subject he explores in the song Nguur (Executive power).

But he also sings of love and African culture like on the track Motherland. "Africa generated almost all music, that's the motherland and I'm saying I want to share that music.”

He hopes to do that with a new band.. and a good booking agent!