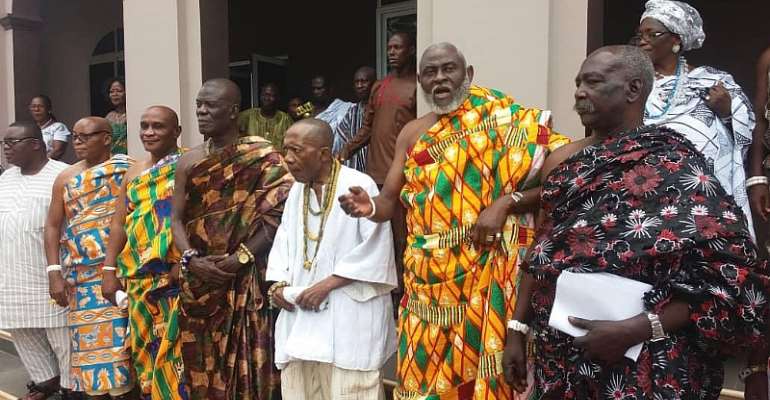 Nii Okwei Kinka Dowuona VI, the Osu Mantse , [4th from right ] in a group picture with some members of the Regional House of Chiefs

The President of the Greater Accra Regional House of Chiefs' and the entire members of the House have commended and expressed their gratitude to the government for the role it played in ensuring peaceful and very successful Homowo festival this year.

The President of the House who also doubles as the Paramount Chief for the Osu Traditional Area, His Royal Majesty, Nii Okwei Kinka Dowuona VI, made the commendation at the induction and swearing in ceremony of the President of Shai Traditional Council, Nene Ode Opeo Martey Awah IV, into the Regional House Chiefs', as a member.

He attributed the success of the festival in the region to the earlier engagement between the Regional House of Chiefs and the Presidency.

To avoid chieftaincy disputes pertaining to installation of newly accepted chiefs, rites and other traditional rituals, His Royal Majesty, Nii Okwei Kinka Dowuona VI, called for the adherence to the provisions in the Chieftaincy Act 759 of 2008, which according to him governs chieftaincy institutions in the country.

He appealed to President Akufo-Addo to continue with the measures put in place by his government to ensure more peaceful and successful Homowo festivals in the coming years.

The Osu Mantse further expressed gratitude to the security agencies for their tremendous roles before, during and after the Homowo festival and urged them to continue their collaboration with the Greater Accra Regional House of Chiefs to enhance the conduct of subsequent Homowo celebrations.

Nii Okwei Kinka Dowuona used the occasion to advise his fellow Chiefs to promote unity and development in their respective Traditional Areas and to desist from acts that will undermine the development of the Ga-Dangme states.

The President prayed for peace and unity among the people of Ga-Dangme and thanked them for ensuring a peaceful and incident free Homowo this year.

Nii Okwei Kinka Dowuona VI advised the newly inducted member to work within the rules and regulations of the House and further cautioned him against using the mandate giving to him to trample upon his people's rights and freedoms but , rather use it to promote peace and unity in Shai Traditional Council.

He further advised the subordinates of the newly inducted member not to use the name of their Chief to engage in any unlawful act which may bring shame and disrespect to their Chief and the people of the area.