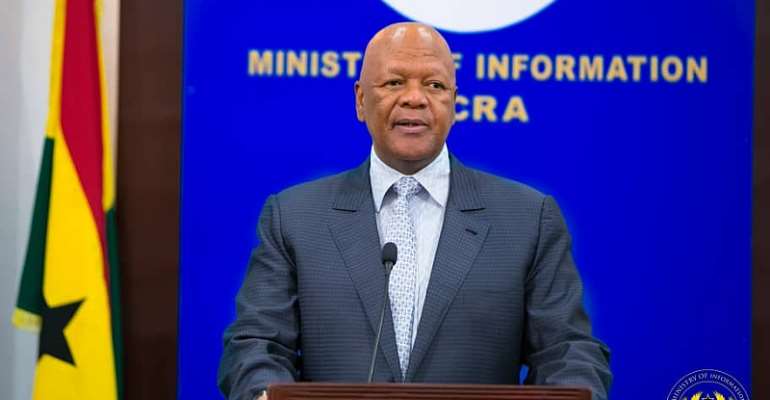 The Special Envoy of South African President, His Excellency Cyril Ramaphosa; Minister Jeffrey Thamsanqa Radebe has on behalf of his country rendered an apology to the people of Ghana following the recent xenophobic attacks which claimed many lives and properties.

According to him, although the recent happenings were disturbing, it does not reflect the values of South Africa’s constitutional democracy.

Addressing the media at a Meet-The-Press on Tuesday, Minister Jeffrey Thamsanqa Radebe said “We have been sent to pass a message to the President of Ghana. We express very deep regret about the incident of violence, looting of properties, death of some South Africans and Foreign Nationals.”

The Special Envoy further added that the xenophobic attacks which saw three Ghanaians sustaining injuries is an affront to the rule of law.

He also hinted that the South African President, Cyril Ramaphosa has tasked his Security Cluster of Ministers to probe further, make arrests and ensure the perpetrators face the law.

“But these events which have unfolded in South Africa should not dent or blur the vision of our leaders in Africa to pursue the Agenda 2063 ‘The Africa, We Want,” he disclosed.

Minister Jeffrey Thamsanqa Radebe stated that regardless of the attacks, both leaders should forge closer relations to ensure the long historic bonds is not undermined.

He, however, revealed that President Akufo-Addo accepted an official apology rendered when he was paid a courtesy call.

He disclosed that South African President, His Excellency Cyril Ramaphosa will use his official state visit to Ghana in December to further consolidate the relationship between Ghana and his country.

Hottest Photo Reports
Catch up with all the political quotes from our politicians.
Advertise here
More Headlines
ModernGhana Links
MMDCEs position useless — Kwame Asiedu Walker
ASEPA drags Shatta Wale to Police CID for faking gun attack
Police arrests Jesus Ahoufe over prophecy of Shatta Wale 'gun attack'
No government has mortgaged the future of the youth than NPP – Mahama
Ameen Sangari Factory will be revived Under 1D1F — Akufo-Addo
Military interventions in two of our member countries ‘backwardness’ – Bagbin to ECOWAS Parliament
I'm sorry, was running away from a prophecy that I'll be shot dead on October 18 – Shatta Wale
Police comb for Shatta Wale after reportedly shot
We Will Not Allow Anyone To Cheat Us In 2024 Elections — Mahama
TOP STORIES