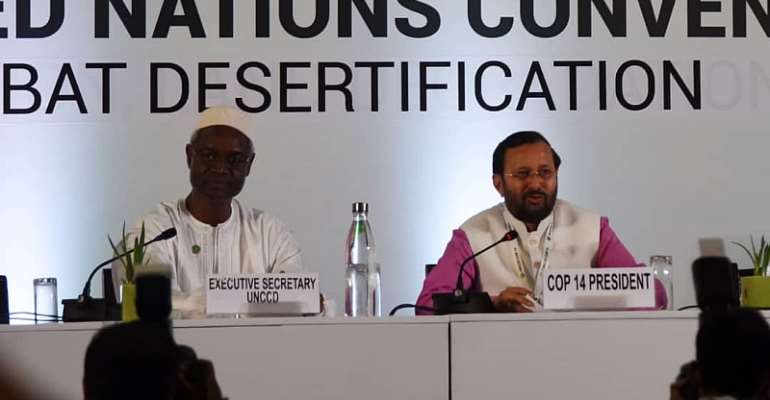 Executive Secretary UNCCD says resources are the major challenge facing Africans in their sweats to achieve their goal of restoring 100 million hectares of land and create 10 million green jobs by 2030 across the Sahel.

Mr. Ibrahim Thiaw said land degradation is a major economic, social and environmental problem of concern to many countries in all regions of the world, adding that country parties have agreed to make the Sustainable Development Goal target of achieving land degradation neutrality by 2030 a national target for action.

“Countries will address insecurity of land tenure, gender inequality in land tenure and promote land restoration to reduce land-related carbon emissions and mobilize sources of finance from public and private sources to support the implementation of these decisions at country-level,” the former Deputy Executive Director of the United Nations Environment Programme said.

The Executive Secretary made this disclosure at a closing press briefing of the 14th Session of the Conference of the Parties to United Nations Convention to Combat Desertification in New Delhi India.

The Session was organized by UNCCD in collaboration with the government of India on the theme - Let’s move towards a greener future.

Mr. Thiaw argued that this COP Session placed people at the heart of what they do. “We have woken up to the fact that we will see more frequent and severe droughts, a phenomenon that will be exacerbated by climate change” he added.

He believes a global movement of restoration, anchored in nature-based solutions would deliver benefits for the three Rio Conventions and for many of the world’s most pressing issues.

“Through the Delhi Declaration, ministers expressed support for new initiatives and coalitions aiming to improve human health and well-being, the health of ecosystems and to advance peace and security” he pointed out.

President of COP 14 and Indian’s Minister for Environment, Forest & Climate Change Mr. Prakash Javadekar reiterated the country’s commitment to achieving land degradation neutrality by the SDG target year, 2030. He also promised to provide effective leadership to the UNCCD during his two-year tenure of Presidentship.

The Conference drew the interest of nearly 9,000 participants. Delegates, including ministers, heads of United Nations and intergovernmental bodies, youth, local governments, business leaders and representatives of non-governmental organizations participate in the Conference, whose theme is “Investing in Land, Unlocking Opportunities.”