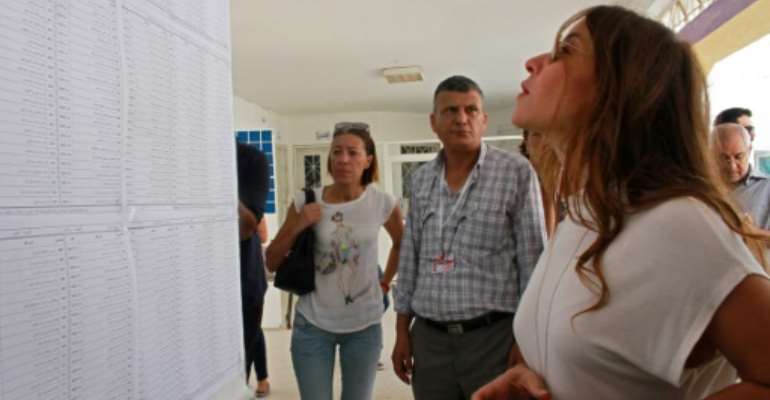 Tunisians chose Sunday from a crowded field in the country's second free presidential poll since the 2011 Arab Spring, with electoral authorities expressing concern about a poor turnout among young voters.

Voting stations closed as scheduled at 6:00 pm (1700 GMT), in what was the first round of the presidential election.

"Young people of Tunisia, you still have an hour to vote!" electoral commission (ISIE) head Nabil Baffoun urged before the close.

"We must leave our homes and vote - it's a right that we gained from the 2011 revolution which cost lives," Baffoun added, visibly disappointed by the turnout.

Three hours before the polls closed, only 27.8 percent of registered voters had cast their ballots, according to the ISIE.

Mourou smiled broadly as he voted, while Chahed said he was "proud of this great event", after casting his own ballot.

"The world is watching. By tonight or tomorrow, Tunisia will be in good hands," the premier said.

His popularity has been tarnished by a sluggish economy and the rising cost of living.

The prime minister has also found himself having to vehemently deny accusations that Karoui's detention since late August was politically inspired.

'Where are the young?'

At polling stations visited by AFP journalists, there was a high proportion of older voters, but few young people.

"Where are the young people? This is their country, their future," said Adil Toumi, a man in his 60s who came to vote "to participate in a national celebration, a victory for democracy".

Tunisian soldiers stand guard outside a polling station as voters arrive to cast their ballots in Sousse on Sunday. By ANIS MILI (AFP)

Publication of opinion polls has officially been banned since July, but one thing appeared sure -- many voters were undecided until just ahead of voting, due to the difficulty of reading a shifting political landscape.

Some hopefuls have tried to burnish anti-establishment credentials to distance themselves from a political elite discredited by personal quarrels.

One key newcomer was Kais Saied, a 61-year-old law professor and expert on constitutional affairs, who avoided attaching his bid to a political party.

Instead, he lobbied door-to-door to drum up support for his conservative platform.

A Tunisian voter casts her ballot for presidential election at a polling station in Sousse, south of the capital Tunis, on Sunday. By ANIS MILI (AFP)

Another independent candidate was Defence Minister Abdelkarim Zbidi, a technocrat running for the first time, although with backing from Essebsi's Nidaa Tounes party.

The long list of active runners was trimmed by the last-minute withdrawal of two candidates in favour of Zbidi, although their names remained on the ballot paper.

On Friday, an appeal for the Tunisian mogul's release from prison ahead of the election was rejected, his party and lawyers said.

Isabelle Werenfels, a researcher at the German Institute for International and Security Affairs, called the vote a democratic "test" because "it may require accepting the victory of a polarising candidate" such as Karoui.

Exit polls were expected overnight Sunday into Monday, but preliminary results not due from the electoral commission until Tuesday.