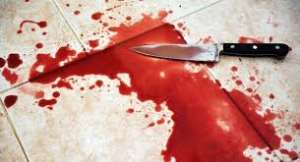 Police in the Northern Region have begun investigations into the alleged murder of a woman by her husband at Janjari Kukuo, a farming community in the Savelugu district.

The Police have revealed that the deceased Mavis Azongo was found in a pool of blood with multiple wounds whilst the main suspect, Wisdom Azongo, had his manhood cut off.

The body of the woman has been kept at the Tamale Teaching Hospital’s morgue whilst the man is at the emergency ward of the same hospital receiving treatment.

District Commander of Savelugu and Naton, DSP Twumasi Ankrah spoke to the brother of the suspect who was at the scene. He spoke to Citi News.

“According to him [the brother], when he came, their door was locked and he could hear someone screaming, so he decided to force their door open. He saw that the woman [the brother's wife] was already dead with multiple cutlass wounds on her, with the intestines gushed out. What he also saw at the scene was that both the deceased and the suspect were in a pool of blood with both intestines gushed out. One could see that the suspect's penis is completely cut off. The police were able to recover or retrieve two kitchen knives at the scene,” he narrated.