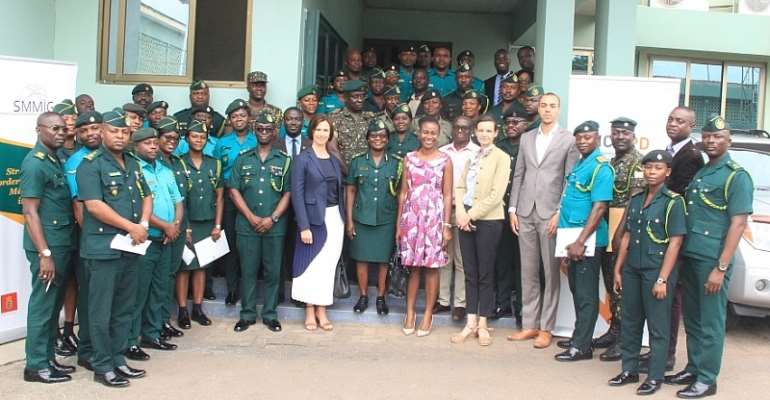 The Document Fraud Detection Training Centre of Ghana Immigration Service (GIS) has graduated 57 students at a ceremony held at the GIS National Headquarters in Accra.

The graduands of the course include officers of GIS, Births and Deaths Registry, Ministry of Foreign Affairs and the Marriage Registry of the Registrar General's Department.

They underwent a one-week training in technical and tactical profiling, enhanced security features of documents and different types of substrates, among others under the Strengthening Border and Migration Management in Ghana (SMMIG) project.

Addressing the graduands in a speech delivered on behalf of the Comptroller-General, the Deputy Comptroller General of Immigration (DCGI) in-charge of Finance and Administration, Mrs. Judith Dzokoto-Lomoh congratulated the graduands for the successful completion of the course and urged them to put into good practice the training that had been given them by examining and apprehending persons with fake and forged travel documents.

“This is one of the many functions of the Service and we must, therefore, be able to detect the authenticity and genuineness of a document in the hand of the owner,” she added.

Mrs. Dzokoto-Lomoh who was the chairperson for the occasion advised the graduands to live up to the Service motto of 'Friendship and Vigilance', and that, in doing that they should ensure they do not unduly delay travelers at the entry points.

She said she was convinced that the knowledge gained by officers would put them in better position to appreciate and effectively confront the challenges that they would face in their document fraud detection roles.

The Netherlands Deputy Ambassador, H.E Katja Lasseur, emphasized the need for the GIS to stay alert at the frontiers in order to detect fraudulent travel documents.

She noted that the Netherlands government would continue to strengthen the relationship that existed between the two countries, and noted that, the best 10 Students would receive further training in Document Fraud Detection in the Netherlands.

Deputy Head of Missions at the Denmark Embassy, Madam Birgit La Cour Madsen emphasized that building strong borders was a prerequisite for a safe haven community, and that, there was the need to ensure thorough monitoring of persons entering and leaving the country. She urged the graduands to continuously improve on their capabilities and experience to help them achieve greater results in document examination.

'Doc 1' qualification was conferred on the graduands and certificates presented to them.

The training was under the tutelage of the Document Fraud Expertise Centre (DFEC) of the GIS in collaboration with the International Centre for Migration and Policy Development (ICMPD) and was sponsored by the Netherlands Embassy.