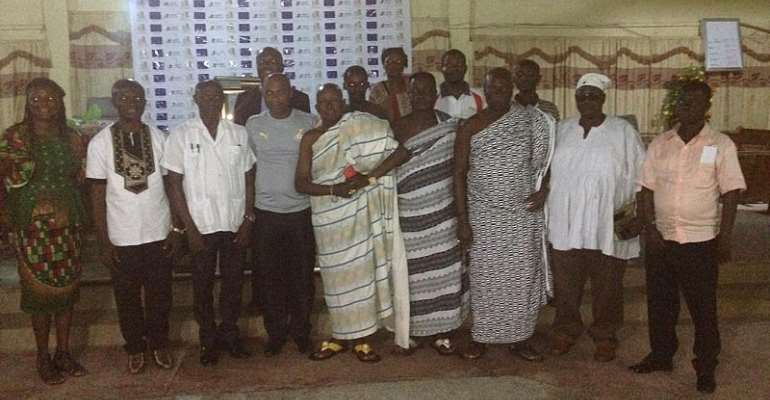 The Obuasi office of the National Commission for Civic Education (NCCE) has organized series of Community durbars at Anyimadukrom in the Obuasi East District and Apitikooko in the Obuasi Municipality on Accountability and Environmental Governance.

Mr. Adams Siddique Zagoon, the Obuasi Municipal Director of National Commission for Civic Education took participants through the planned action under the Accountability, Rule of Law and Anti-Corruption Programme (ARAP).

He said, NCCE is required to campaign and advocate for an increase in accountability and reduction in corruption in Ghana. He added that, the aim of the durbar is to bring all stakeholders involved in the ARAP together to find solutions on how to promote Good Governance in Ghana by wrestling against corruption and ensure compliance with the law as well as increasing accountability.

He also argued that, corruption has been a destructive albatross on societies and has wreaked havoc on population across the globe. Corruption destruct democracy and throws away the relevance of the rule of law, paves way for infringing on human rights and also impacts negatively on the quality of life of the country’s citizens.

The NCCE Director also hammered on some of the negative impact of corruption detrimental to Good governance which include; provision of poor services in areas such education, health, sanitation, providing substandard works by contractors, decline institutions responsible for good governance, loss of lives and properties, and so forth.

Mr. Zagoon in his speech concluded that, he has hope that the durbar will mark the beginning of a new dawn that will create an impetus for change in the Governance of the nation so that the ultimate aim of the ARAP that is increase in accountability and reduction in corruption will be attained. "I therefore encourage everyone to be part of the success story" he ended.

On his part, Mr. John Donkor, a representative of the Commission on Human Rights and Administrative Justice (CHRAJ) also posited that Corruption is illegal and thus the law demonstrates that it is not supposed to be tolerated.

He continued by saying, as part of the government effort to combat corruption, the whistleblowers Act 720 Act 2006 was enacted.

He added that corruption-related crimes that one needs to blow whistle on include;

He emphasized that one needs to be very sure of the information he or she is blowing whistle on before informing the agency where whistle is blown without compromising on the name and place where crime is yet to be committed as well as the name and address of the whistleblower for the agency to issue to him or her an acknowledgment letter which signifies that the complaint has been lodged.

He also said the Commission and other agencies are charged with the mandate of shielding whistleblowers from victimization.

He established that when it is known after in-depth investigations that indeed the complaint made by the whistleblower is true and accurate, whistleblowers will be rewarded from the coffers of Whistleblowers Reward Fund (WRF) in monetary cases and in non-monetary instances, reward will be determined by the Inspector General of Police and the Attorney General.

He made it known that, the law demonstrate that any act of corruption can be reported for investigation to be carried out. He expressed that some agencies that whistleblowers can lodge a complaint include but not limited to; the Attorney General’s office, Narcotic Control Board, Office of the President, District Chief Executive, National Media Commission, Intelligent Agencies, Minister of State, Commission on Human Rights and Administrative Justice, Local Chiefs, Head of a Religious Body, the Family head of the whistleblower, Ghana Police Service and the likes of others.

Mr. Donkor, in conclusion, urged the participants to inform others who were not able to attend the durbar and also report Corruption related issues to the commission or any other Agency.

She said, the E.P.A is charged with making sure that human activities that are detrimental to environmental pollution are minimized or better still eradicated.

She stated that environmental issues should not be compromised on and need to be reported to the Environmental Protection Agency as soon as possible.

Hon. Dr. Boakye Yiadom (MP for Obuasi East District) who was the Guest of Honour added that there have been a lot of issues to discuss when talking about corruption. He said it is not only those in government that are corrupt but each and every one in one way or the other engage in corrupt activities.

He went on to emphasize that it is incumbent on everybody to put a stop to their corrupt activities in other for good governance to prevail. " if anyone gets to know of anybody who is engaged in corrupt activities, he or she should not hesitate to inform the Commission or its sister agencies for investigation to take place" .

The Chairman, Nana Sarfo Kantaka in his closing remarks praised the government, the Honorable Member of Parliament for Obuasi East, the NCCE and other dignitaries for such an educative program and pleaded that such programmes should be extended to other communities. He urged the audience to go and live by what they have heard for a better Ghana.