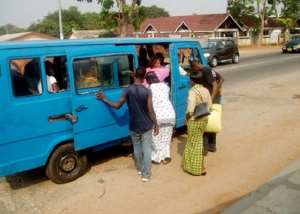 The Ghana Private Road Transport Union (GPRTU) plans to bring into the country 200 brand new vehicles for its members to be used as “trotro” to boost commercial public transport.

This comes on the back of an argument that the vehicles used in the country lack seat belts and other protective gears, which expose passengers to danger or unsafe conditions.

When asked on Eyewitness News whether it was fair that the Union was not giving its passengers value for money, looking at how unsafe the “trotros” are, the Greater Accra Industrial Relations Officer of GPRTU, Ibrahim Moro Abass explained that most of those vehicles are like that because they are old and worn out.

He noted that the Union will receive new vehicles soon to phase out the old ones.

“We, the GPRTU Greater Accra are importing some. If God permits it won't take more than two months, and they will land. The current buses that we are bringing into the country have been fitted with seat belts. We are importing them in tranches. In actual fact the agreement is about 200 buses now,” he claimed.

Public transport fares have been increased by 10 percent effective September 16, 2019.

A statement from the GPRTU and the Ghana Road Transport Coordinating Council said the increase was “to accommodate predominantly an increase in fuel prices.”

The Driver and Vehicle Licensing Authority (DVLA) in September 2014 threatened to stop registering commercial vehicles that do not have seatbelts for passengers.

According to the then Acting Chief Executive of DVLA, Rudolph Beckley, the decision was in conformity with Section 119 of the Road Traffic Regulation Legislative Instrument (LI) 2180.

He emphasized that the implementation of the LI on the use of seatbelts was to achieve a 50 percent reduction in deaths and serious injuries associated with vehicle accidents by 2020.

But so many years after, the directive is yet to be enforced as commercial drivers convey passengers in vehicles without seat belts.