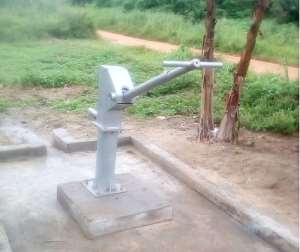 The people of Okyrekojoman in the Isu- Siding electoral area in the Prestea Huni-Valley Constituency are elated about the construction of a community borehole to serve them and its surrounding communities.

The people until now had difficulty to access portable water, a situation which was touched the heart of the Member of Parliament Hon. Lawyer Barbara Oteng - Gyasi (Mrs.) who also doubles as the Minister for Tourism, Culture and Creative Art for the area to construct the said community borehole.

This is part of the MP's agenda to construct not less than six community and mechanised boreholes every year to support her constituents to get access to good drinking water under the **wassahemaa foundation**.

So far most communities have benefited from the project.

The community members are full of commendations for Hon. Lawyer Barbara Oteng-Gyasi (Mrs.) and Hon. MCE for thier kind gesture by providing them such a facility because looking at where they use to fetch water and now that the MP has constructed a community borehole for them, they believe it will go a long way to improve thier health system and also eradicate waterborne diseases like **Diarrhea, cholera, Typhoid fever ect**. which before the construction of the borehole they have been battling with.

The community members pleage to support the MP all the time since most of the MP's were not able to meet thier pressing demand. They congratulated the MP and MCE. and finally conculed by quoting "oliver Twist" more should come.