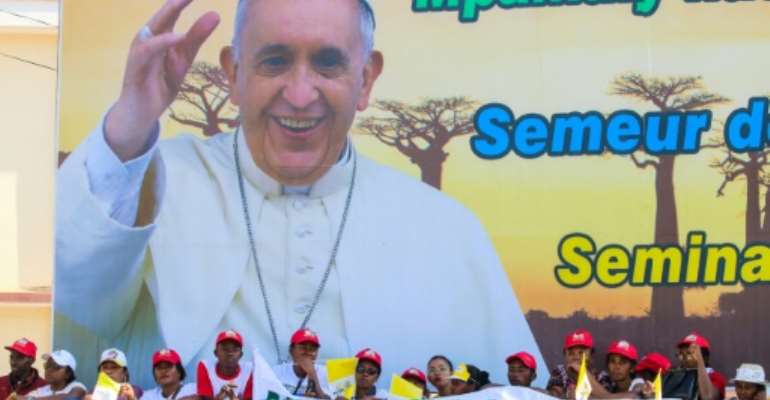 Catholic worshippers wave Vatican flags as they wait for Pope Francis near Ivato International Airport in Madagascar. By Mamyrael (AFP)

True to his reputation as "pope of the poor", Pope Francis begins a visit Saturday to Madagascar, one of the world's most impoverished nations.

Arriving from Mozambique, where he pleaded for understanding and the renunciation of violence in a country riven by 16 years of civil war and now hit by jihadist attacks, the Argentine pontiff's first port of call on Saturday was to be a mass and prayer vigil with at least 12,000 young scouts.

Tafika Fanomenza, 39, who is helping to coordinate the scores of volunteers involved in the preparations, as well as in the pontiff's security, hoped Francis' visit would help bring about change in Madagascar.

More than half of young people on the world's fifth-largest island are out of work, even if many boast good qualifications.

In a population of 25 million, nine out of ten people live on less than $2 a day.

In a population of 25 million, nine out of 10 people in Madagascar live on less than $2 a day. By RIJASOLO (AFP)

Political instability has done nothing to help the development of an economy largely dependent on agriculture, and the export of vanilla and cocoa in particular.

Sunday will mark the high point of Francis' visit with a huge mass in the capital expected to be attended by some 800,000 pilgrims.

Many had already started setting up tents on the outskirts of the city on Friday, armed with posters of the Argentine pontiff.

The high point of Francis' visit will be a huge mass on Sunday attended by crowds of 800,000. By RIJASOLO (AFP)

"We are tired, but it's worth making all these sacrifices to see the pope with our own eyes and receive his blessing," he told AFP, impatient to set out on the final two-hour hike on Sunday to attend the mass.

"We spent 65,000 ariary ($18/16 euros) and brought three kilos of rice to make the trip to Antananarivo," said another pilgrim and farm worker, Jean-Claude Rabemanatrika, 40.

"There are five of us at home and we don't have enough money so we had to choose just one family member to make the trip."

"We've provided toilet, showers, a sick bay and somewhere to cook for our 5,000 guests," beamed Marino Andriamasy, 35, who is in charge of the makeshift site where the pilgrims are staying.

The last pope to visit was John Paul II 30 years ago.

"I was a lieutenant when I helped with the security of John Paul II in 1989. Today I am a divisional general and overseeing security for Francis' visit to Madagascar," said Samuel Rakotomalala.

Some 700 police officers will be deployed at the site, which is also equipped with 200 surveillance cameras and the 12,000 young scouts will also help out.

In June, 16 people were killed and dozens hurt in a stampede outside a sports stadium in the capital during a free concert.

The previous year, one person died and 41 were injured in a crush during an African Cup of Nations qualifier.