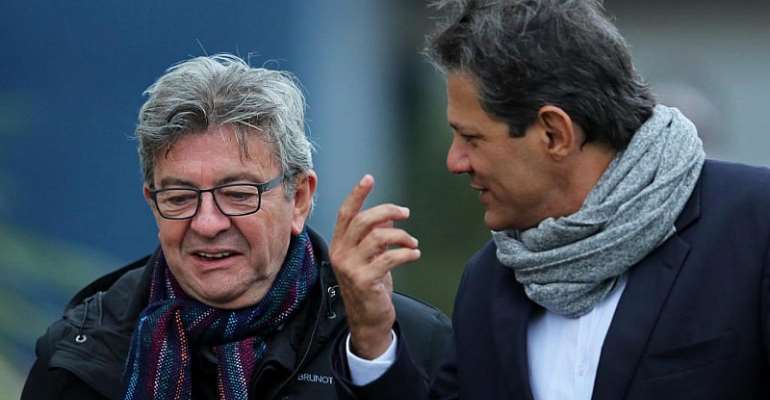 "Nobody believes that Lula is corrupt. Everyone knows that he is in prison for...a political reason, which allowed Jair Bolsonaro to be elected," Mélenchon told journalists Thursday after meeting with Brazil's former president.

The popular leftist leader is serving a 12-year prison sentence for taking bribes.

In 2018, he was accused of receiving a beachside apartment and a country house from engineering firms in return for their winning lucrative state contracts under his Workers Party's government.

Lula, who was the favourite to win last year's presidential election before he was jailed, has continued to insist he is an innocent victim of a political conspiracy to thwart him returning to power.

Lula's sentence is "undetermined and not fixed," continued Mélenchon. "There is no limit to the use of the justice system in a political trial. Even Stalin was better. At least he tried to obtain a confession. In this case, there hasn't even been one."

In recent weeks, leaked conversations have emerged calling into doubt the credibility of the judge who put Lula behind bars. The judge, Sergio Moro, is now Brazil's justice minister in right-wing President Jair Bolsonaro's cabinet.

Going too far
Last month, Brazil's Supreme Court justice admitted that prosecutors had gone too far and that Lula deserved a retrial.

The former president's legal woes do not appear to have dampened his spirits, however. Mélenchon said after their encounter that he had "come away with more energy".

"I found him to be very strong, on all levels. He called on us to lead the resistance," explaining that "a large amount of their discussion centred on lawfare," a form of war consisting of the use of the legal system against an enemy, such as by damaging or delegitimising them.

"We are determined to fight, each person in his own country, to unite, to support one another in these political trials that we're facing," added Mélenchon.

Two of the same coin
The former French presidential candidate too is facing an anti-corruption investigation of his hard-left France Unbowed party.

'It is the same method [as the conviction of Lula], perhaps the conclusion won't be the same, I don't know," but "it is the same accusations without proof and a violation of our rights of defence," he said.

Mélenchon will appear before a criminal court on 19 and 20 September, along with five of his party members after he shoved a prosecutor and an officer in a fit of rage over police raids on his home and party headquarters.

As for Lula, his fate will depend on an upcoming decision by the Brazilian Supreme Court on whether or not to push for a retrial.