President Akufo-Addo, Former Heads of States Call For An End 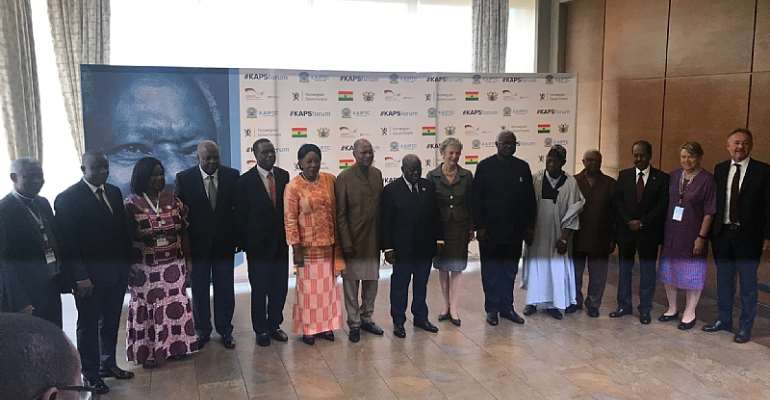 President Akufo-Addo among six other Head of States have called for an end to violence extremism in Africa following a two day Kofi Annan Peace and Security Forum on peace operations held in Accra.

According to the President, the forum will highlight the major priority of the contemporary agenda on our continent, which we must collectively confront, and give cause to continue to celebrate the works of Kofi Annan, a man who spent his life making peace where there was conflict.

Speaking at the Kofi Annan Peace and Security (KAPS) Forum on the theme; ‘Peace Operations in the Context of Violent Extremism in Africa’, He said “The theme prompts a number of immediate questions. Some of such includes; What should be the role of peace support missions in the context of violent extremism? What kind of peace support operations can provide effective response to the phenomenon of violent extremism? How should such missions be composed and deployed? Which entity or entities are best placed to mandate and capacitate them? How should human rights be observed in the midst of violent extremism?”

President Akufo-Addo further added that most often through bitter experience, terrorism and violent extremism are not restricted to particular geographic locations or jurisdictions, as the impact of a single terrorist incident in one part of the world resonates throughout the world.

It is emerging that West Africa, in recent years, has become a hotbed of terrorist and extremist activities, as a result of greater activism of groups operating in the North East of Nigeria, the Lake Chad Basin, Mali and the Greater Sahel. Endemic poverty and widespread disillusionment amongst youth in Africa are not only providing fertile breeding grounds for those who want to cross the Sahara Desert on foot, and the Mediterranean Sea in rickety boats, in the hope of finding a better future in Europe, but also for a new generation of terrorists and violent extremists.

This is most worrying, because surrogates of al-Qaeda in the Sahel, and Boko Haram militants, operating around the Lake Chad basin, the two most active terrorist groups in West Africa, are known to exploit the unacceptable levels of poverty in these areas, in the recruitment and indoctrination of youth. Furthermore, the growing number of breakaway terror groups, in addition to our natural vulnerabilities, notably the spread of ethno-linguistic groups, and the porous nature of our borders, call for regional and continental approaches to contain the growing threats of terrorist and extremist activities.

“Despite being a beacon of peace, stability and democracy in a region that is plagued by the activities of terrorist and extremist groups, Ghana must know she cannot be immune from terror attacks. She is determined, however, to deepen the religious tolerance and peaceful co-existence that exist between the majority Christian and the minority Muslim religious groupings in the country. They are hallmarks of our nation, which we cherish. Our major encounter, so far, with a terrorist or extremist group came in 2015, when agents of the so called "Islamic State" succeeded in recruiting a few adherents from the country's university campuses to join the ranks of the group's fighters in Libya and Syria. They are known to have died in combat. Two Germans, of Ghanaian parentage, are also known to have joined the group, with one currently serving a jail term in Hamburg, Germany.” He recalled.

President Akufo-Addo also stated that the activities of terrorist and extremist groups in Ghana, currently takes the form mainly of fundraising activities by allegedly charitable organisations, which divert these funds to support extremist activities around the world.

In aid of the global call to action against terrorism and violent extremism, Ghana has signed and ratified a number of international instruments, aimed at the prevention and suppression of international terrorism. The contents of these instruments have also served as guides in the formulation of our Counter Terrorism Policy, which seeks to prevent acts of terrorism in the country. The Counter Terrorism Policy has led to the setting up of a Counter Terrorism Unit, within the National Security Council Secretariat, to lead and co-ordinate our efforts in the fight. Ghana has adopted a well-coordinated Inter Agency Approach, which encourages the timely sharing of information and intelligence, operational coordination and joint strategy formulation, and has proved essential towards ensuring the efficient execution of the country's Counter Terrorism Policy.

I recall my meeting with the Secretary General of the United Nations, His Excellency Antonio Guterres, on the margins of the United Nations General Assembly, held in September 2017, in New York, where we discussed the need for increased collaboration within West African countries in tackling the increasing incidence of terrorism and violent extremism in the region – a proposition that Ghana heartily endorses.

Former President John Dramani Mahama said the best safeguard against violent extremism is the existence of resilient society which has greater inclusion.

“People must feel that the State exist for them of which gives them loyalty. When this sinks in deep, nothing pushes them to pick up arms or weapons to fight. There must also be greater resources. Nations grow via their Gross Domestic Product (GDP) but how is that growth shared among the class chain? Are the poor and vulnerable being taken care off? Do they have social safety nets, social safety interventions that make life meaning for them? If these do not exist then certainly, they will be ready to carry guns against the Government.”

He challenged African countries to properly manage their political and geographical spaces, adding that devoid these, leads to violent extremism.

Former President of Liberia, H.E Prof. Amos Sawyer revealed that countries that are affected by violent extremism clearly cannot run its own affairs adding that these activities have left it fragile.

He said “These countries lack resources and State capacity. It is important that there is Regional or International efforts joining forces to work on security issues and also how to reach marginalized people who are a potential prey for recruitments for these people who engage in violence extremism.”

H.E Prof. Amos Sawyer added that the United Nations (UN), African Union (AU) and Economic Communities of West African States (ECOWAS) needs to structure and synchronize the architecture of security engagements as well as develop new capabilities not necessarily in weaponry but in ways that are able to relate to persons living in local communities.

Former President of Sierra Leone, H. E Dr. Ernest Bai Koroma highlighted that Violent Extremism and its problems needs to be addressed by the State.

“The State must ensure that it adheres to the tenants of good governance, provide space for participating of the citizenry irrespective the District or Region, they come from, Religion, Age. There has to be complete inclusiveness, protection of Human Rights, Rule of Law and the development of the State must be prioritized.”

“To improve the interactions between the State and ordinary citizens, Governments must visit people in the remotest areas, listen and find a lasting solution for them. The African Union (AU), United Nations (UN) and Economic Communities of West African States (ECOWAS) should also make it a duly to empower the nationals.” He said

Former President of Burundi, H. E Pierre Buyoya tasked the State to dispatch its Security Institutions to every district and region in the country to guide the citizenry.

“Is the State and its Institutions present everywhere in the Regions and Districts? What of the State of Rule of Law? How is the State of Human Rights? Are people having their rights violated? These are very important and African Heads of States must take note.” He said.

Former President of Central African Republic, H. E Catherine Samba-Panza hinted that it is important to truly appreciate the active cooperation that exists between the African Union and the United Nations.

“The African Union has developed a plan for countering violent extremism whiles the United Nations has also come up with a global plan to counter violent extremism. It will be commendable to have a better collaboration and interaction to enable the two Institutions fully implement these strategies to promote peace and security which is indispensable for the development of the world.” She emphasized.

In Ghana, Government at great cost in January 2017, instituted a system of free secondary education, which has increased enrolment by nearly 50%. From this month, when schools re-open, 1.2 million Ghanaian children will be beneficiaries of the Free Senior High School policy, the highest number of pupils in secondary school in our history. The cost of providing free secondary school education will be cheaper than the cost of the alternative of an uneducated and unskilled, youthful workforce that has the capacity to retard our development, and to pose a threat to the peace and stability of our nation. With the majority of the continent’s economies dependent on the production and export of raw materials, it is not surprising that our youth want to leave in search of greener pastures elsewhere in economies that generate more jobs. Ghanaians cannot continue travelling this worn path of limited success of being exporters of raw materials. Ghanaians have to embark urgently on the structural transformation of our economies. The only way to ensuring prosperity in Africa is through value addition activities, in other words, through industrial development with modernised agricultures, in transformed and diversified economies. Citizens must rapidly leave behind the old agrarian economies, and embrace the technological and digital potential of the new, modern economies, and, thereby, give opportunities, jobs and hope to our young people, to live dignified, productive lives here at home.