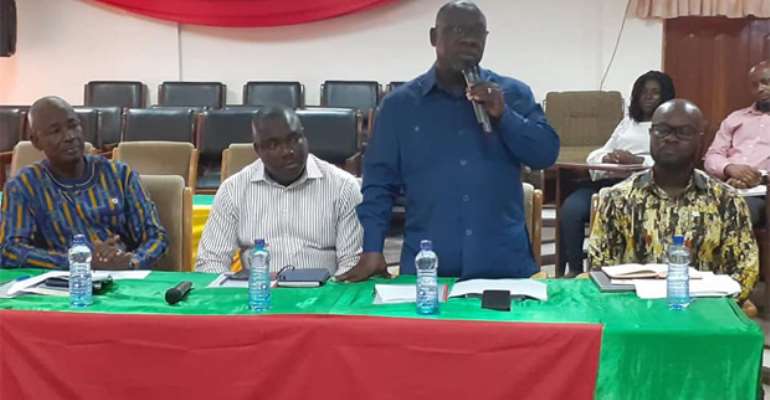 He expressed surprise about TMA, which once upon a time intended to dash its share of the Common Fund to other assemblies, is now struggling to meet its Internally Generated Fund (IGF) target for the year.

The MP called for the need to interrogate rationale behind the shortfall in revenue regeneration.

“It means back then you were doing well in IGF but now the story has changed due to property rate issues which is affecting your revenue collection. We need to interrogate whether they were being over ambitious in their targets, over spending or simply not collecting efficiently.”

Mr. Amoah expressed the concern when he paid a working visit to the TMA to deliberate on the Metropolitan developmental issues. He was accompanied by other senior officials of the ministry.

He served noticed that he would be visiting most Metropolitan, Municipal and District Assemblies (MMDAs) in the Greater Accra to have firsthand information on issues bothering the assemblies and how best to resolve them.

“We decided to come to the grounds to listen to you, and also fortify what we already know and how to address the issues you are facing.

“Issues such as sanitation, security, education, health, roads and building permits among others, would be top issues since we are serious in ensuring all assemblies meet their revenue targets and we are not going to joke with revenue issues as you can already see.”

However, in a quick response, the Metropolitan Chief Executive (MCE) of Tema, Felix Mensah Nii Anang-La, blamed the shortfall in revenue generation on the mandate of some other government institutions such as Tema Development Company Limited (TDC) and Ghana Ports and Harbours Authority (GPHA).

According to him, mandates of those state institutions are affecting the full operations of the TMA, saying that “we have managed the situation to avoid conflict but it's really affecting the assembly.”