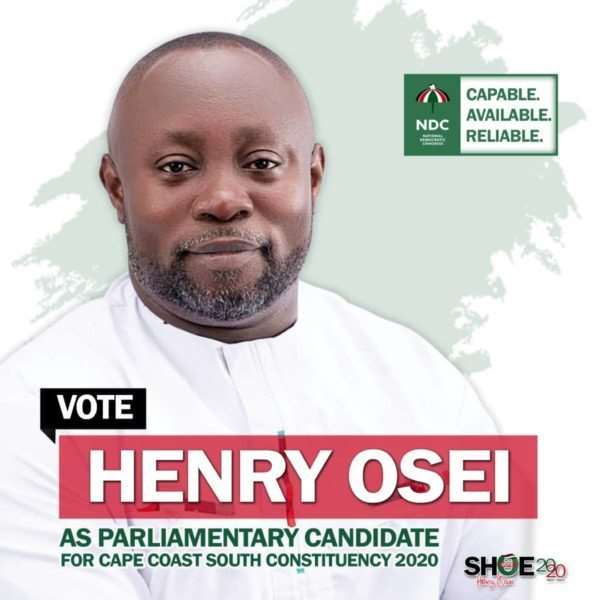 As part of the agenda to retain Cape Coast South Seat for the opposition National Democratic Congress (NDC) and also secure victory for Ex-President John Dramani Mahama, Mr. Henry Osei (Shoe) who was an aspiring parliamentary candidate for NDC in Cape Coast South Constituency but loss the election to the incumbent Member of Parliament, Kweku Ricketts-Hagan had shown the way for others to follow.

Upon hearing the outcome of the results, Mr. Osei granted interviews to the media houses which were present at the Cape Coast Town Hall where the election was held to indicate to the public that he had accepted the outcome of the election and pledged his unflinching support to the victor and the party. He made it know that, his prime objective is to see the success of the party and ensure that the seat is retained by the NDC.

After leaving the election ground, he then placed a phone call to Hon. Ricketts-Hagan to congratulate him and assured him (Ricketts-Hagan) of his commitment and support to work towards retaining the seat and seize power from the NPP.

He also called Mr. Thomas Hughes Amissah (Skillful) for participating in the contest to deepen democracy in the party. Mr. Amissah had shown a good sportsmanship before, during and after the primary and Mr. Osei congratulated him for that. Although they were not successful but both of them could pull over 61% of the total votes cast. It shows that, if they join forces with the incumbent MP, the party will definitely win both presidential and parliamentary votes.

On Sunday, 25th August, 2019, Mr. Henry Osei (Shoe) issued a statement to congratulate Hon. Kweku Ricketts-Hagan for emerging as the party's Parliamentary Candidate to lead them into resounding victory in the 2020 general elections.

He assured the party of his decision and readiness to work hand in hand with Hon. Kweku Ricketts-Hagan and the leadership of the constituency towards victory 2020. He urged all members to put aside their differences and work as a party because they cannot disappoint the suffering masses who are hoping to be rescued by the NDC and John Dramani Mahama.

On Monday, 26th August, 2019, Mr. Osei had studios interviews at Darling FM in Cape Coast, Live FM in Cape Coast and Benya FM at Elmina to reecho his position of accepting the decision by the delegates and his commitment and willingness to do everything he could to help secure victory for H. E. John Mahatma and Hon. Ricketts-Hagan. He used those platforms to thank the rank and file of the party and the good people Cape Coast who showed him love and support. He encouraged party members to rally forces behind Hon. Ricketts-Hagan.

On Monday evening, he met his campaign team and expressed his profound gratitude for such a good support. He urged them to close ranks and support the MP to retain the seat because they cannot afford to lose the seat. He also urged them to dissolve the team because the primaries were over and they must give necessary support to Hon. Ricketts-Hagan.

The Chairman of the Campaign Team of Mr. Osei (Shoe), Alhaji Ten Ten, on Tuesday, 27th August, 2019 issued a communiqué to officially dissolve the team for the greater interest of the party. They also pledged their commitment to the party's victory and to ensure the seat is retained by the MP.

Mr. Osei embarked on thank you tour where he visited all the wards in the constituency to show his appreciation for their support and also encouraged them to work towards victory 2020.

On Friday, 30th August, 2019, he worshipped with the Muslim Congregants at Cape Coast Central Mosque to thank Almighty Allah for His protection and grace.

He ended the tour on Sunday, 1st September, 2019 where he worshipped with Christian Congregations at International Christian Life Cathedral at Antem New Site and True Love Church at Kru Town, Cape Coast.