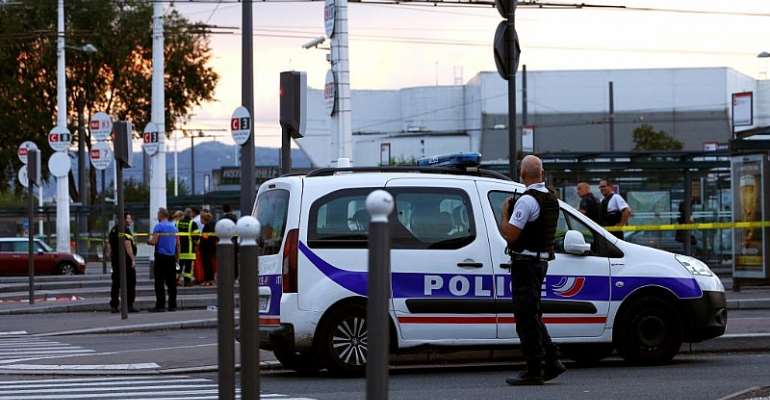 An Afghan asylum-seeker who killed a man and stabbed several others in the French city of Lyon sparked a row about immigration on Sunday as new details emerged about his rampage.

Investigators said the killer appeared to have psychological problems and had smoked large quantities of cannabis before stabbing the 19-year-old man to death and injuring eight others on Saturday afternoon at a bus station in the Villeurbanne suburb.

He was found in public records with two identities and three different dates of birth, making him either 33, 31 or 27-years-old, prosecutor Nicolas Jacquet told a news conference in Lyon on Sunday.

During "confused" interviews with police, he said he was Muslim "who had heard voices saying God had been insulted and instructing him to kill," Jacquet said, adding that the case was being treated as a criminal, rather than terrorist, incident.

Jacquet paid tribute to three bus drivers and other members of the public who had succeeded in cornering the man and persuading him to drop his knife and a meat skewer before the police arrived on the scene.

"I want to pay tribute to the actions of witnesses. Their courageous and controlled intervention was decisive in ending these criminal acts," he added.

Sofiane, a 17-year-old from the area, told French news agency on Sunday that the dead man was one of the first to try to reason with the knifeman.

The killer "stabbed him and then when he fell on the ground, he continued," Sofiane explained.

A young girl, still in shock at having witnessed the attack, said: "A man at the 57 (bus) stop started stabbing people left, right and centre."

"Nobody came to help so I threw myself on her (one of the victims) to protect her to prevent him stabbing her again," said the girl, who finally managed to help the woman into the bus.

Abdelkader, one of the bus drivers who came to their aid, said he saw the assailant head towards the metro and instinctively challenged him as he repeatedly slashed at one victim.

'Expressionless'
"His face was expressionless -- you felt he was stabbing away just for the sake of it," said Abdelkader.

On Sunday, he admitted to feeling "worse and worse -- many flashbacks are coming back to me," prosecutor Jacquet said.

Far-right figurehead Marine Le Pen meanwhile led criticism of what she termed "the laxity of migration policy" in France which she said was "a serious threat to the safety of French people."

Political exploitation
Jacquet said the knifeman had been first registered in France in 2009 as a minor, but travelled to Germany, Norway, Britain and Italy before returning to France in 2016 where he was granted temporary residency rights.

Police raided his room in an asylum-seekers' centre following the stabbings.

The mayor of Villeurbanne, Jean-Paul Bret from the Socialist party, accused Le Pen and others on the right and far-right of "exploiting things politically."

"It's the classic reaction from the far-right which tries to turn a dramatic event to its advantage," he told the RTL radio station.

He also reminded Le Pen that offering asylum to people fleeing conflict in places such as Afghanistan was an international duty that France respected.

France has been the victim of a string of Islamist-inspired terror attacks since 2015 that have cost hundreds of lives.

Two of the eight injured victims remained in hospital on Sunday, but none was in intensive care, Jacquet said.