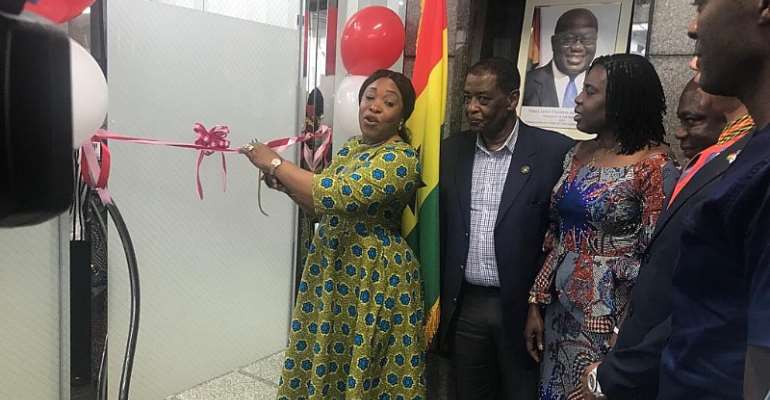 Ghana has extended its biometric passport application centre and visa section at its Mission in Tokyo, Japan.

The centre was commissioned on Saturday, August 31, 2019, by the Minister of Foreign Affairs and Regional Integration, Shirley Ayorkor Botchwey.

It is located at Ghana’s Chancery.

Madam Ayorkor Botchey is in Japan for the 2019 Tokyo International Conference on African Development (TICAD).

The commissioning of the centre is in fulfilment of the Minister’s promise to the Ghanaian community in Japan to ensure they have their own biometric passport application machine in Tokyo to ease the application and renewal of passport for them and their counterparts in Singapore.

She had made the promise in December 2018.

According to madam Ayorkor Botchwey, the new centre “will serve as the hub for printing of passports in Asia.”

She indicated that the old process of applying for a Ghanaian passport was cumbersome and time-consuming, sometimes passports were printed in a rush, resulting in missed deadlines for important appointments and mistakes in the printed passports, with respect to names and other details.

“Consequently, as a Government and a Ministry,” she, “we have been working around the clock to improve not only the processing of our Ghanaian passport but also to ensure that the security of our passport processing system remains comparable to excellent international standards.”

She explained that so far, the processing has gone through higher and higher levels in the last few years with some of Ghana’s Missions given authorization to process and print passport abroad.

Additionally, the Minister noted, in April 2019, the Ministry rolled out the extension of the validity of passports from five years to ten years for persons above ages of 17.

” Children up to the age of 17 will still have five-year validity passports for obvious reasons,” she told the Ghanaian community.

“While we are on the subject of passports, I would like to take this opportunity to appeal to every Ghanaian who carries a Ghanaian passport to treat the document with the utmost respect and patriotism,” she said.

“We need to respect our passport as much as we respect our flag. We now have so many agreements with different countries which permit Ghanaians to travel to several countries without a visa,” according to her.

She expressed the hope that with the addition of the Tokyo Mission to the satellite Missions processing biometric passports, the equipment would be put to its optimum use.