Five Cops Murdered In A Month 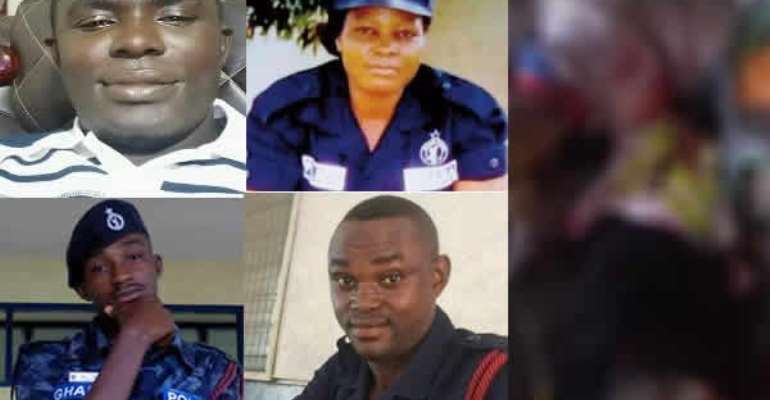 Five police officers have killed in the past 30 days, the deadliest in recent times.

Myjoyonline.com recaps the tragedies that have hit the country within the Ghana Police Service.

July 30, 2019: Corporal Agatha Nana Nabin with the Northern Regional Police Command was shot dead at a police checkpoint on the Tamale-Kumbungu road in the Sagnarigu District.

The report is that armed and masked men in a grey saloon car discharged their weapons after being stopped at the check-point.

The 30-year-old officer was shot at the back of the head with the bullet passing through the mouth and killing her instantly, media reports say.

Her last words as she ran were ‘Jesus, Jesus’, media outlets have reported.

Another female officer escaped death as she ran and stumbled. The killers took away two rifles belonging to the deceased and her colleague who escaped.

His was found dead after working hours at Manso Abodom in the Amansie West District of the region.

There are conflicting reports over how he was killed. Initial reports said he was shot but police sources say he may have been bludgeoned with a metal. He was reportedly seen with his suspected killers in a white pickup vehicle, registered AS 9116-15. The vehicle has been impounded.

He was found dead at the Dukes fuel filling station Monday dawn while on duty.

His rifle between his thighs while he sat in a chair with bullet wounds to his head which was slumped backward. Police have not ruled out suicide or that his weapon discharged accidentally while he slept.

L/Cpl. Alhassan Asare is survived by a wife and two children who live at Akyem Swedru Police Barracks.

During usual checks on the Buduburam stretch of the Accra-Winneba road, the team flagged a driver of an unregistered vehicle to stop.

The driver set off a chase after refusing to stop. Armed men in the saloon car opened fire, hitting Sgt Micheal Dzamesi in the head.

He took cover in a provision shop close by but collapsed in there and was rushed to the hospital. Lance Corporal Mohammed Awal was also hit in his lower pelvis and the left side of his back, Daily Graphic has reported.

He died at the Police Hospital in Accra where he was receiving emergency care.

Three suspects have been arrested.
---myjoyonline