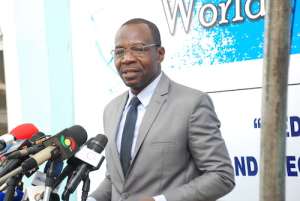 The Ghana Journalists Association (GJA) has condemned an attack on Adom TV correspondent in the Oti region during the parliamentary primaries of the National Democratic Congress (NDC) on Saturday.

Kwame Owusu Obrempongba was attacked by the party’s Nkwanta South Constituency Secretary, Prince Succeed Fiagadzi for capturing a fracas between two candidates on camera at a polling station to the displeasure of his attacker.

Mr Fiagdzi immediately pounced on the reporter, gave him hefty slaps and destroyed his video camera as well.

Describing the act as ‘barbaric,” the Association has condemned attack on the journalist and commended the police for acting promptly to arrest the Constituency Secretary and beginning investigations into the matter.

“The conduct of the Constituency Secretary, to say the least, leaves an ineradicable mark on the integrity of the NDC primaries in that constituency,” GJA Volta regional secretary, Alberto Mario Noretti said.

The Association assured its members and Ghanaians that it will not rest but pursue the matter to its “fullest degree”.

“For now, GJA Volta is urging all members and practitioners to stay away from functions organised by the NDC until the branch apologises for the obnoxious conduct of the Constituency Secretary and replace the damaged camera.