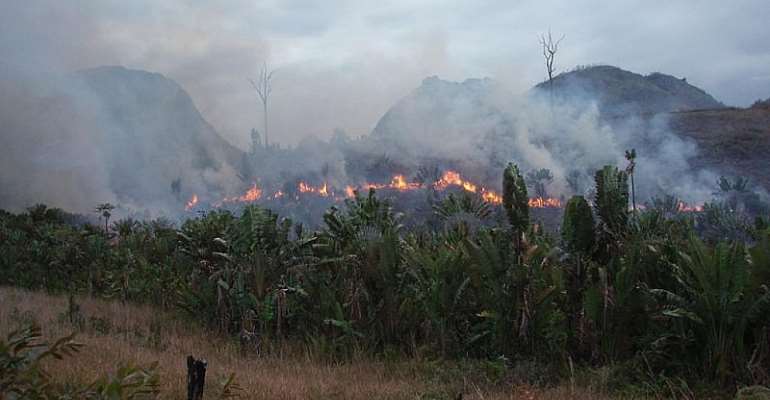 The Amazon is burning but recent NASA satellite images show large parts of central Africa are also on fire. Should there be equal outrage? There may be cause for concern long term but there are important differences between fires in the Amazon fires and the Congo Basin.

The densest blazes are in the central part of the continent, around the Congo Basin forest commonly referred to as the “second green lung” of the planet after the Amazon.

The forests cover an area of 3.3 million square kilometres in several countries, including about a third in the Democratic Republic of Congo, and the rest in Gabon, Congo, Cameroon and Central Africa.

Just like the Amazon, the forests of the Congo Basin absorb tons of carbon dioxide (CO2) in trees and peat marshes which experts see as a key way to combat climate change. They are also sanctuaries for endangered species.

But the story behind the fires is not the same.
A tale of two forests
Most of the fires shown on the NASA maps of Africa are outside sensitive rainforest areas.

“We should be careful of mixing things up,” climatologist Arona Diedhiou from the Institute for research on development (IRD) told RFI, highlighting the fact Africa's rainforest fires are often more seasonal and linked to traditional seasonal farming methods.

“Deforestation takes place in Cote d'Ivoire for cocoa and in the Congo Basin [...] for the sometimes unauthorised exploitation of tropical species,” she explains. “But the fires in Africa cannot be compared with what is happening in South America. Brazil is destroying more forest than DRC. In the Amazon we've seen a spectacular increase in fires over the last few months. This increase is very worrying, that's where the emergency is.”

Slash and Burn
There is broad agreement among Brazilian scientists that wildfires in the Amazon are caused by rampant deforestation as farmers clear the forests to free up arable land to plant, for example, soya used in animal feed.

In contrast, fire is part of a farming tradition in Africa known as slash and burn: every year at the end of the dry season, farmers set fire to the bush and use the ashes as fertilizer.

According to Arona Diedhiou the burnt savanah grows back, as if by magic, in one season.

But -- forests are different and can take decades, even a century to regenerate.

Angola's government urged caution over the NASA photos, which don't distinguish between between different types of vegetation, saying swift comparisons to the Amazon may lead to "misinformation of more reckless minds".

Growing concerns long-term
The fires in central Africa may be part of a traditional farming culture, but they can still have a negative impact.

Short term they pose a health risk and long term they are counter-productive for both biodiversity and soil fertility.

The quality of soil is decreasing due to an increase in deforestation leading to an average 9 percent drop in GDP. In some African countries it can be as much as 40 percent according to the latest report by the IPCC on the link between climate and food production.

Greenpeace Africa is campaigning to protect the Congo Basin forest from industrial agriculture and is also monitoring the fires.

“We're very worried that the forests in the Congo Basin are more and more exposed, more vulnerable to fire because these forests are threatened by an increase in the pace of deforestation,” Irène Wabiwa Betoko, Senior Forest Manager with Greenpeace Africa told RFI.

“The fires that are in the savannah regions, the fires caused by traditional farmers, risk getting out of control and reaching the Congo Basin.”

She cites a swathe of fires in forests in Congo Brazza in 2016 near a logging project.

Changing the culture
Efforts are being made to encouraging populations to move away from the slash and burn farming methods but there are major challenges.

In DR Congo, only nine percent of the population has access to electricity and many people use wood for cooking and energy.

President Felix Tshisekedi has warned the rainforests are threatened if the country does not improve its hydro-electric capacity.

“Fire is part of the African culture and you can't ask those people to stop using fire altogether for their lives," says Wabiwa, "but what we can do is to support them to use less fire for agriculture because there are other sustainable ways of doing agriculture without using more fire.

"So we're calling on the government to do more to support communities to become more conscious and to use less fire for the agriculture,” she added.

Would $20 million dollars help?
At the G7 summit this week, nations pledged $20 million to help combat Brazil's wildfires and following the NASA images French President Emmanuel Macron said they were looking at a similar initiative for the African continent.

Extra money can be helpful, but there has to be a gradual shift in culture.

“Illegal activities, illegal deforestation should be stopped," says Wabiwa, "and I think this is the right time where African governments and international communities should work together and stop deforestation and put a ban on industrial operations and activities within the Congo Basin rainforest."

For Arona Diedhiou a real shift in behaviour could be helped along by the “4 per 1,000” initiative which promotes practical methods of storing carbon in the soil.