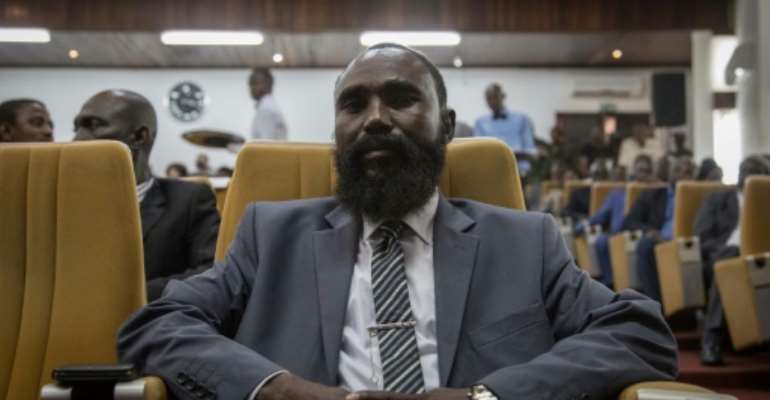 Mahamat Al Khatim is leader of the Patriotic Movement for Central Africa (MPC) and one of the most powerful militia warlords. By FLORENT VERGNES, FLORENT VERGNES (AFP)

The leader of one of the main Central African militia groups resigned from his government post on Tuesday, dealing a blow to the country's fragile peace process.

The Central African Republic signed a peace deal with 14 armed groups in February and brought powerful warlords into government posts -- the eighth attempt to end the fighting since conflict erupted in 2013.

Mahamat Al Khatim, leader of the Patriotic Movement for Central Africa (MPC) and one of the most powerful militia warlords, quit his post as military advisor because of "fictitious and ineffective" work, a statement said.

Khatim had been named as a military advisor charged with establishing the so-called mixed security patrols between armed forces and militia fighters, one of the key parts of the peace deal.

But their formation has been complicated by disagreements during meetings on Friday and Saturday.

For the government, rebel groups must disarm and demobilise first before they can be integrated into the mixed units.

But some militia commanders want troops cantoned after disarming before joining the mixed units. Officials say such a measure was not budgeted in the demobilisation programme partly financed by the US and World Bank.

Prime Minister Firmin Ngrebada has called on leaders of the militias to show "good faith" and respect the peace commitments made during negotiations in the Sudanese capital Khartoum.

The CAR has been struggling to recover from the bloodletting that erupted after former president Francois Bozize, a Christian, was overthrown in 2013 by mainly Muslim Seleka rebels.

Since then, fighting has forced nearly a quarter of the country's 4.5 million people to flee their homes and rival militia groups control most of the country.