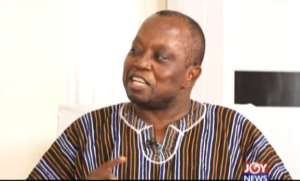 He believes functioning audit systems are the country’s best bet in the fight against corruption and excessive spending that is crippling the public purse.

“We have set up an internal audit function in the public sector but we have abused it. It has been so abused that you look at the internal auditor’s report and you virtually find nothing in there because of independence issues.”

He said if the internal audit systems are effective, it lessens the burden of the external auditor who can then confidently rely on what has been provided for their work.

“The only time the external auditor would like to go back and do his own checks and reviews is when he doesn’t trust the independence, the competence of the internal auditor which is largely the case in Ghana,” he lamented.

Mr. Domelevo said because the systems have been chronically abused, reports produced by internal auditors have “nothing in there.”

But the auditors cannot be entirely blamed.

While they are competent and qualified for the positions they occupy, the people they report to tend to influence their work.

“The person he is supposed to check is his boss who has every authority and control over him. Contrast that against the staff of the audit service. When my people come and they are auditing any of government institution…they know you cannot do anything to them.

“You are not part of their promotion system, you don’t determine their remuneration, and you cannot dismiss or discipline them so they have the independence that is required to do professional work.”

The Board Chair of the Internal Audit Board, Joseph Winful who was also a panel on the show acknowledged this.

He said because the internal auditors are employed by the Metropolitan, Municipal and District Assemblies (MMDAs), they are left with no choice than to do as they are told as failure to go by what they have been instructed could cost them their jobs.

“These internal auditors, let’s face it, are humans with responsibilities, their children are in school and they’ve got to leave them and go to a remote area simply because he has brought out an issue that needs addressing.

“And then being so human, he will just give in and say ‘I have done my best but there is not much I can do’ and as a result, you don’t have an internal audit process taking place. Because the report that will come in is not worth the paper that maybe it is on because it has been couched in a way that will suppress the issues,” he added.

He is surprised that while the Public Procurement Act (PPA) and Financial Administration Act (FAA) and the Internal Audit Agency Act were passed in the same year to inject financial discipline into the system, the latter has yet to be revised to suit current on the job demands.

“So the profession is not growing because we are not laying emphasis on it but if we are able to support it, to reposition it, all the infractions that the external auditor will come and expose may have been resolved,” he added.

The discussion was being had on the back on a recent revelation of allegations of corruption and conflict of interest labelled against the CEO of the Public Procurement Authority, Adjenim Boateng Adjei.

His company, Talent Discovery Limited was only incorporated in 2017 but has since won a lot of contracts.

More disturbing, TDL does not execute the contracts but rather sells them to the highest bidder.

Adjenim Boateng Adjei has been suspended by the President pending investigations into the issue.