Saving Ghana Club 1947 to the Present 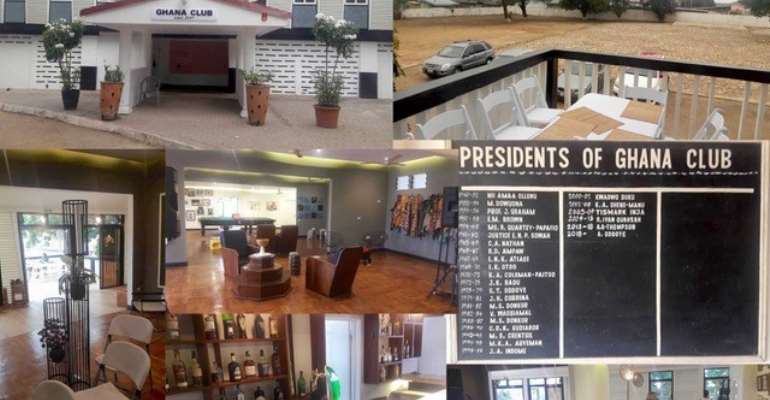 I am a freshman member of the Ghana Club, meaning I am a recent inductee. When it opened its doors to its original members I was not born. I was born in the year the first president of the Club ended his term.

The Club is ten years older than Ghana, having been established in 1947 when Ghana was Gold Coast – not surprisingly therefore, it was originally the Gold Coast Club, with Nii Amaa Ollenu, a barrister, and a future Speaker of Parliament, as the first President, serving from 1947 to 1952.

The name change came as a result of the Declaration of Independence when the Gold Coast adopted the name Ghana from an ancient West African empire. The records show that it was a tug of war between those who wanted the pre-independence name retained and those who wanted it to reflect the country’s new status as an independent nation. The new name group won by a very slim majority!

The Club started off with many amenities including an inexhaustible bar (still does), catering (stopped for a while and recently resumed), and all types of indoor and outdoor sporting facilities. A tennis court with lights was a showpiece of the Club and very much patronised by members and their guests. Children of members were encouraged to be “ball boys” and were thus introduced to the game at an early age. Some members became very proficient and could hold their own against professionals. The court was such a central feature that the racquet was the constant companion of some members and guests. The court is no more, having been eclipsed over time by Accra Lawn Tennis Club but the space is available for re-development.

A member described the beginnings to me as a “Gentleman’s Club”. It was not that the Club did not accept women members, it did and even had a female President, Mrs. R. Quartey-Papafio from 1956-1960 and by all accounts proved that what the men could do, the women could equally excel in. In the very latest inductions, July 2019, women were among the inductees.

But in those early days, the men, who were mostly the civil servants and for whom the place was established in the first place, naturally gave it a patriarchal tendency but even then, during weekends, it had a decidedly family feel, with events like barbecues, snooker, card games and even Guy Fawkes nights at the appropriate time of the year. Yes! And that one too! We were still a British colony and had to ape the mother country’s historical traditions.

There was no discrimination along any line, a policy which has continued to the present. They came in a variety of colours, ethnic groups and indeed a wide assortment of shapes, heights, sizes and predilections. An anecdote sent to me by a senior member recounts how “The late Dr Beausoliel, because of his well-endowed tummy dressed as Father Christmas at the Annual Party for the children of the members”!

Though it was essentially a Civil Servant’s watering hole and chatting emporium, notable professionals like lawyers, doctors, teachers, industry and mercantile captains were welcome and became members through an introduction followed by a formal induction. It was set up, said a member to me, to give its members, “imbued with the spirit of social graces a place to unwind”. It was the “social graces” which over the years, earned the place a reputation of being elitist.

There was also Accra Club, established for British expatriates and situated within walking distance of Ghana Club on the High Street and housed in a building which after independence became the Arts Centre. As an “official” club hosting some national events and receptions for visiting dignitaries, it was very exclusive. The many dances and cultural events held there allowed some of the ”natives”, to don their finery and make an appearance, but its exclusivity was never lost on these “natives”! The place was for whites!

Roger Club, where the Bank of Ghana stands today was another club which very much reflected the ethos of the Accra Club. The “Been-Tos” were the “returnees” of the time – people who had been abroad, the UK especially, and affected a certain life style and accent who hovered round these clubs, but eventually would gravitate to the Ghana Club.

If buildings could talk, the 72 years old club house, sited almost abutting the Gulf of Guinea, nestling somewhere between the Independence Square and the Ministries enclave, would have had much to regale listeners with. Its rich source of reference material for Ghana’s immediate pre-independence and subsequent post-independence periods would provide great fly on the wall insights that could never be found in the pages of a book These were officials with direct experience and inputs into the workings of how Ghana was midwifed into being and how it was sustained.

The house was bequeathed to the Club by Sir Alan Burns, Governor at the time and was originally the residence of Mr. Bamford, the police chief whose legacy went beyond a club house by producing a daughter, Mrs. Justice Bamford-Addo who later became a Speaker of Parliament in the 4th Republic.

Looking towards the sea from the balcony, the building commands quite a majestic vista of the sea and coastline – trees on the compound with naturally manicured canopies, as though they had been given haircuts to look that way, according to the lore, achieved the look from the wind blowing from the sea in a particular direction, which after decades of cropping, ended in the “Tokyo Joe” haircuts!

If the club house had a voice, it would recount with some nostalgia how it was built to parallel the exclusive expats’ stomping ground for British colonial officers, Accra Club, which was out of bounds to the native officers and how these native officers matched the Accra Club boot for boot in all departments! It would recall with pride its role as being the first social amenity for the bourgeoning Ghanaian public/civil service elite. The roll call of those who have passed through its doors would list some of the top names who played significant roles in the struggle for independence and the building of modern Ghana.

When it had its first existential threat of being evicted, it took the personal intervention of Chief Patron Prime Minister Kwame Nkrumah to pull rank and countermand the threatening order. All Heads of State are automatic Chief Patrons and toasts are often drunk to the good health and long life of a sitting Head of State.

Age has not diminished the grace and sophistication of the place. What must once have been an impressive architectural landmark – and still is – is holding its own with much dignity against modern-day clubs that have sprung up to cramp its style. The signs of age have not reduced it to decrepit disability but rather has retained its potential for perpetual youth as can be seen in a very recent refurbishment which has brought it to 21st Century standards without sacrificing its 20th Century integrity.

Unlike the humans who first started with it and are long gone to eternity, it still stands with its historical memories buried in its walls, roof, floors, windows and doors!

Ghana Club has been earmarked for demolition to make way for a marine drive project but due to appeals of the current management to the powers that be, it is being considered for a reprieve. Any redevelopment of that area which leads to the demolition of Ghana Club would be depriving Ghana of an irreplaceable iconic historical monument. There is a campaign to save it and there are indications that it may receive a listed status and survive!

After all these years of service and now facing a threat to its continued existence, the Club’s ongoing facelift has added more life to this septuagenarian, which at the time of writing was hosting an exhibition, “Africa By Design” whose organizers are youngsters in the age group of the grandchildren of the original founders. It has this year alone hosted as disparate activities as a concert lecture by the legendary Koo Nimo, the parade of vintage cars filmed and broadcast by CNN and even domestic mini beer brewing!

The stigma of elitism over the years, was most unfortunate because the Club was established to confirm the dignity of the colonial subject’s quality, good taste and decorum – qualities that are still its hallmarks…

Saving Ghana Club means saving a little bit of our history; so many similar monuments have been lost forever due to new-fangled ideas of modernization. The efforts of the current management are yielding results, for example, a British company recently brought back to life the snooker table, built in the UK, (Where else?), which had been sitting there for years, rotting away and earmarked for the dump! The historical value of the table was what led to the company’s philanthropy.

Today, with an impressive programme line-up, its strongest attraction still remains a place to unwind, alone, or with cronies. For this reason, it is open every day and closes when the last member or guest leaves.

There is convivial brainstorming, but overt partisan politicking and religious proselytising are frowned upon, though issues of public interest are usually not far from the surface and attract very robust staking of positions – just don’t get carried away as to degenerate into ungentlemanly behaviour!

I have come to love the place, perhaps my most favourite “spot” in Accra, where I commingle with my peers and those older or younger, amidst the interesting paradox of being required to choose your words carefully while at the same time allowed your freedom of expression – but it has served the place well – a culture worth preserving for the rest of the country to take a cue from…

Ghana Club is run by a Board of Trustees and Management Team with dues-paying members having the final say...Join and save an iconic living but threatened monument.