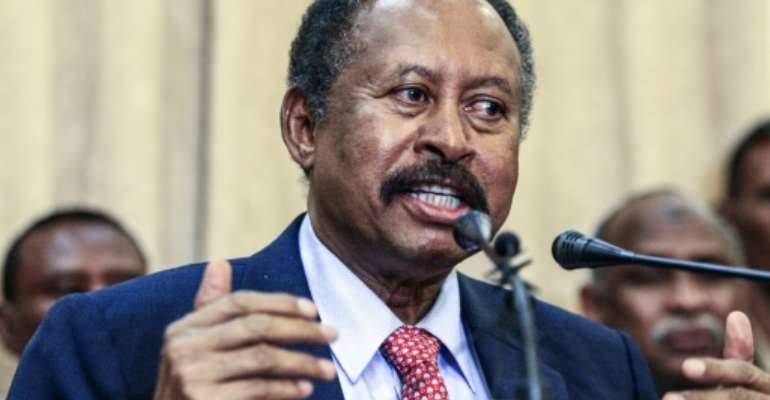 Hamdok built a career in international continental and international organisations, most recently as deputy executive secretary of the UN's Economic Commission for Africa in Addis Ababa.

He was welcomed off the plane Wednesday by two civilian members of the new Sovereign Council that was sworn in hours earlier and will oversee his government's work.

The Sudanese people's main expectation of Hamdok will be tangible solutions to the dire economic crisis Bashir's rule and the last few months of political turmoil have caused.

"With the right vision, with the right policies, we will be able to address this economic crisis," he told reporters after taking the oath on Wednesday.

He vowed to devise an urgent recovery programme addressing the shortages of basic commodities that have plagued Sudan and its 40 million inhabitants recently.

The protests that eventually ended Bashir's 30-year rule were ignited in December last year by the tripling of bread prices.

In the longer term, Hamdok emphasised the need to improve productivity and rebuild a banking sector he said had all but collapsed.

His credentials as an economist seem solid, as was abundantly documented in the official biography distributed to media during his oath-taking ceremony.

The text stressed Hamdok is "highly credible among African finance and development institutions, the International Monetary Fund and the Paris Club" of creditor countries.

Hamdok worked for the African Development and Trade Bank and is credited with shaping some of the policies that spurred Ethiopia's rapid economic growth under the late prime minister Meles Zenawi.

Greeted as the saviour of Sudan's economy, the greying, moustachioed technocrat was all smiles when he took questions from journalists on his first day on the job.

While he was outside Sudan and not directly involved in the protest movement that terminated Bashir's rule, Hamdok's appointment appeared to be well received by the population.

"He has the skills we need the most at the moment," said Sumaila Ibrahim, a 21-year-old student at Khartoum University.

Hamdok is also an alumnus, having completed a degree in agricultural economics in the capital before moving to Manchester in the United Kingdom for his masters.

Besides his credentials as an economist, Hamdok has carved an image as a champion of transparency and good governance in the course of his rich career in African organisations.

He sat on the board of the Mo Ibrahim Foundation, which was founded by the eponymous Sudanese-British billionaire to promote good governance and leadership in Africa.

Last year he turned down an offer by Bashir to become finance minister as part of a government reshuffle.

As the head of Sudan's future government, which according to a roadmap laid out by protest leaders and generals is to be formed by August 28, Hamdok is not only in charge of the economy however.

He will need to draw on his experience in his various African peace-building initiatives to bring an end to deadly conflicts in Sudan's regions of Darfur, Kordofan and Blue Nile.

This is where the co-existence between generals who all rose to their positions in Bashir's wings and the civilians in the transition's new institutions could be most tested.

Hamdok was born in 1958 in the state of South Kordofan, which found itself on Sudan's southern border when South Sudan became independent in 2011, after decades of war with the north.

His own native village is now in a war zone and Hamdok will be keen to push for a resolution of Sudan's civil conflicts, but he has his work cut out reconciling the military with the rebels.

US Congressman Jim McGovern, a keen observer of Sudanese affairs and vocal critic of Bashir's Islamist regime, highlighted that pitfall in a statement on Wednesday.

"I look forward with hope to a transitional period that places the rights and aspirations of the Sudanese people front and centre," the Democrat said.

"I have grave concerns, however, about whether military and political officials associated with the former regime will prove trustworthy partners given their history of violence, repression, corruption and bad faith," he warned.