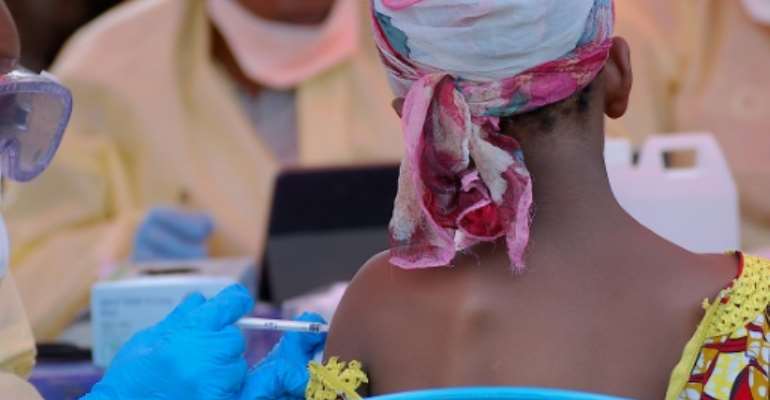 The announcement last week of the first confirmed cases in South Kivu revived concerns that the highly contagious disease could cross the porous borders of the central African country. By Augustin WAMENYA (AFP/File)

A child has died from Ebola in DR Congo's South Kivu, health authorities said Monday, the second person to succumb to the virus since the epidemic spread to the eastern province.

The announcement last week of the first confirmed cases in South Kivu revived concerns that the highly contagious disease could cross the porous borders of the central African country, where it has claimed more than 1,900 lives since August last year.

The first death in South Kivu was a woman in her twenties who evaded movement controls to travel from the North Kivu town of Beni, the epicentre of the outbreak, to South Kivu's capital Bukavu and then Mwenga.

She died on Wednesday, and her seven-month-old son has been diagnosed with the virus and is receiving treatment.

Bahizire said that "two other suspected cases, two women, have been detected and admitted to Bukavu's transit centre".

The two women "were in contact with the woman who died last week while she was staying in Bukavu on the way to Mwenga," he added.

The outbreak of the haemorrhagic virus began in North Kivu on August 1, 2018 and spread to Ituri province.

According to the latest numbers published on Sunday, 1,934 people have since died, while 862 have been cured.

The latest outbreak is the second-deadliest on record after more than 11,000 people were killed in Guinea, Sierra Leone and Liberia between 2014-2016.

Also on Monday, World Health Organization (WHO) chief Tedros Adhanom Ghebreyesus called on the nine countries that share a border with DR Congo to show solidarity to stop the spread of Ebola.

"We now have an Ebola vaccine that is more than 97 percent effective and treatments that are more than 90 per cent effective if used early enough," he said in Republic of Congo capital Brazzaville.

Our police officers don't work with their senses as soldiers...
1 minute ago