A double-digit investment in the agricultural sector is needed to transform agriculture, IITA’s Sanginga says 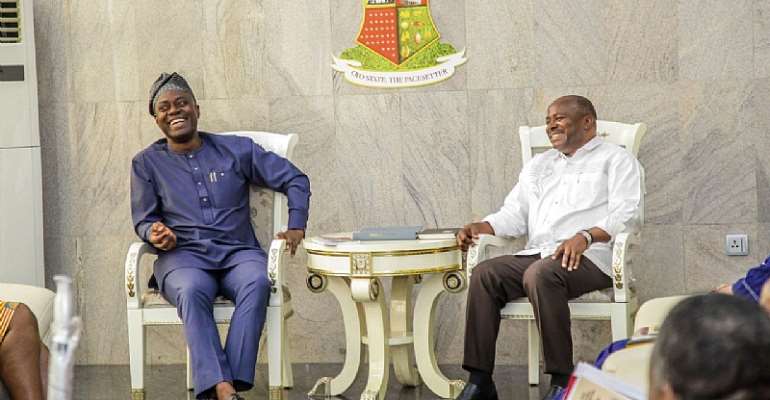 A double-digit investment in the agricultural sector backed by a vibrant rural infrastructural network will help states in Nigeria to accelerate the transformation of agriculture, says Dr. Nteranya Sanginga, Director General of the International Institute of Tropical Agriculture (IITA).

“No matter our good intentions, we will not see a transformation in agriculture if we continue to invest less than 10 percent of our budget on agriculture,” Dr. Sanginga said during a courtesy visit to the Governor of Oyo State, Engr. Seyi Makinde, in Ibadan.

In 2003, African heads of state in Maputo committed to investing at least 10 percent of their annual budgets in agriculture. Sixteen years after the declaration, only a few countries have implemented that declaration.

“One of the countries that have fulfilled the commitment is Ethiopia…Ethiopia is today investing more than 10 percent and that country is witnessing a rapid transformation in agriculture,” Dr. Sanginga explained.

Referring to the Oyo State Agricultural Policy framework, the IITA boss said that Oyo state’s investment in agriculture had nosedived from about 7 percent to 2 percent from 1995 to 2017, adding that the new administration needs to reverse the trend.

On rural infrastructure, Dr. Sanginga said the government should pay close attention to rehabilitation of rural roads (feeder roads) to help the transportation of agricultural products from the farm to the markets.

He decried the deterioration of infrastructure in several farm settlements in Oyo state and urged the government to tackle the trend.

Dr. Sanginga also called on the government to seek ways to involve the youths in agriculture, stressing that inclusiveness was imperative for sustainability in the agricultural development agenda of the state.

In his response, Governor Makinde commended the IITA DG for the courtesy visit and pledged the commitment of the state to work with IITA to achieve agricultural transformation.

The governor noted that his administration had identified four pillars: education, rural infrastructure, economic development (agriculture), and security to help bring the dividends of democracy to the people of Oyo state.

He noted that for the state to attain economic development, agriculture must be transformed.

“This is because most of our people depend on agriculture for their livelihoods. Besides, through agricultural transformation, we will be able to provide the needed jobs for our youths…the jobs we promised during the election campaigns,” he added.

On infrastructure, the governor said work on one of the major agricultural roads (Moniya to Iseyin) would commence soon. On completion, the road would ease the movement of farm produce to the market. He also said that discussions were in top gear with the federal government to rehabilitate the Oyo town-Iseyin road.

The meeting with the Governor was facilitated by Debo Akande, Executive Adviser to the Governor on Agribusiness.