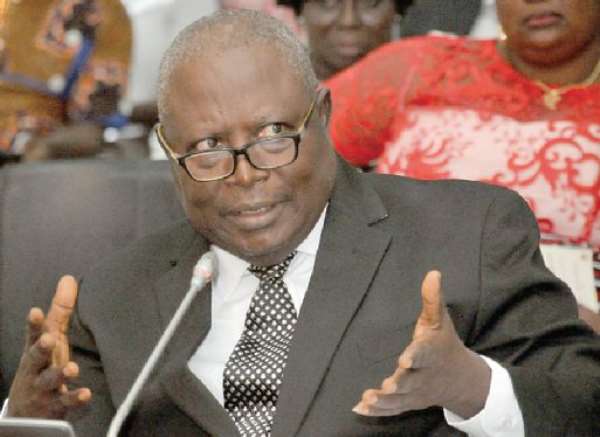 One Rajesh Goyal, an Indian author, once said “Let your consciousness, savoir faire and understanding liberate you from all the clutches of delusions, dopiness, greed, arrogance, sufferings and hopelessness. Let you reclaim your brilliance, be able to interact with the core of your being, connect, integrate and merge with your higher self and feel the bliss, acceptance of what is and joy that comes with radiating your true self to your world. Let all the dense and menacing fog be cleared away by your own sunlight.”

The author’s viewpoint invokes a lot of wisdom for Ghana’s Special Prosecutor, Mr. Martin Burns Kaiser Alamisi Amidu. And if only he and his likes could find sense in such words which were said many years ago, they would discover like the rest of us, how needless it was as it is today to convict and droop people through the writings of numerous articles on daily bases, when indeed, they know they cannot do that before any competent law court. Unfortunately, Mr. Martin Amidu is not a person to be placated with such ideas in leadership because he has assumed the status of Mr All-Knowing.

I believe he is more accustomed to his confined world of leadership brigandage, thunderous or pointless attacks on people through his constant writing of epistles in the mainstream media. But Ghanaians are now getting to know what some of us knew years ago that he is only a great writer of words about the leadership space of Ghana and not a result oriented leader as he has made many to believe. No apologies!

Need I remind Ghanaians how Mr Martin Amidu hastily used every corrupt allegation against the former government as an opportunity for lengthy derogatory articles? All his write-ups were impugning on the credibility of individuals especially former appointees of the past two administrations; both the late former President John Evans Atta-Mills’ and former John Dramani Mahama’s governments. And he went ahead and identified personalities who were swimming in a deep pond of corrupt practices who should’ve been hung publicly or be sent to jail without delays.

I remember how the antic-corruption preacher man, told Ghanaians in many of his articles that the former President John Mahama’s government machinery was propelled by day-light armed robbers. He became the political messiah to rescue Ghanaians from the evils of the then government; and in a remarkable effort to prove that his allegations were watertight, in his own court, he then went ahead to list numerous political actors and appointees, as persons who were bleeding the country into its untimely death through dubious corrupt acts.

In his usual lengthy and contemptuous writings, Mr Amidu would never forget to reel out volumes and volumes of accusations which he said were evidential enough to put such persons in jails. People clapped with smiles for him. He was celebrated and became the new hero of our time. I never tried to envy him. I only prayed that he should be handed with another leadership position for Ghanaians to actually get to know him better. On my bended knees, I always prayed.

As I stated in one of my previous articles, literally, Mr Amidu dragged his supposed corrupt persons to the market square, denuded, and sprayed them with allegations so thick that they would never be washed clean again in their entire lives. As the former Attorney General of same government, he continued rolling out fantastic stories of how he had water-tight evidence against such appointees. Powered by social and the traditional media outlets, the stories leapt across boundaries within seconds. As the stories were retold and re-circulated, they grew weirder and wilder. Former President John Mahama was painted in a colour undesirable of looking at by any sane person.

My good friend, Mr Martin Amidu relied heavily on the Woyome’s GH¢ 51 million judgement debt as his measuring tool. It was so wrong, so wrong to pay Judgement debt then. He told stories about how stinking the judgement debt was and how John Mahama and some of his topmost officials were deeply involved. Public anger against Mr. Woyome and the government grew in a larger proportion. Former President Mahama’s government, some senior officials and Mr Woyome were brutally savaged in the social media, ridiculed in the newspapers, cursed in the market places, abused in commercial cars, and mocked by their political enemies.

The Woyomegate, corrupt John Mahama’s government officials and the brave antic corruption crusader, Mr Martin Amidu’s stories became the tales by moonlight! It eventually painted the government unworthy of the people’s votes and it was massively rejected by the electorate. If this was all that the Citizen Vigilante Martin Amidu had set out to achieve; he did a fantastic job.

And as my father used to advise us that time is not a good friend to anyone; then came the Akufo-Addo’s new administration. Our dear Mr Amidu was handed a new position as the country’s first Special Prosecutor. And for over two years now, he has been our Special Prosecutor, a position he could easily used to prove his allegations against the corrupt individuals he claimed were dinning and wining with corruption by dragging them before court to have them thrown into jail. Yet, it is over two years down the line that the man who had watertight evidence against such persons he listed hasn’t been able to prosecute a single soul. But instead of concentrating in discharging his duties, Mr Amidu has resumed his past character by rather releasing epistles of how he is being prevented from performing. He has even dared the government to sack him if it so wishes.

I am stunned by Mr Amidu’s brand of politicking, but not surprised because I expected same old, same old stories from him when he was handed with that position. Overtime, I have known him as unique in political weirdness, vendetta and very acerbic attacks on opponents. He is very conversant with the character of politics and leadership in the country and knows that Ghanaians are very romantic with leaders who promise one thing and do exactly the opposite. It appears that Mr Amidu’s political survival only depends on the extent he constantly attacks perceived rivals with concocted claims and confrontations. In such instances, he roars like a wounded lion.

Many Ghanaians have now seen our former antic-corruption crusader as a person who has the passion to twist facts and stir up hatred on the political pitch, even where the circumstances besmirch such colorations. But for him, so long as the missiles weaken their targets, it’s alright. As the popular saying goes that; the end result justifies the means, the likes of Mr Amidu are infinitely consoled. I am the least dumbfounded that he has started bickering everyone in the Akufo-Addo government now as he did with the previous governments.

He is easily provoked once the system does allow him to do what he thinks is right for him and at such points, he accuse, scold and even curse those who he assumes constitute obstacles. From President to the police, to the appointees, and political opponents, Mr Martin Amidu spares nobody. What I know is that such leaders are perpetually afraid of their own shadows. Each of such people’s actions is conceived and delivered on the altars of assumption.

And it can be glimpsed from the recent numerous alarms by him that people are sabotaging him. Since he grabbed the SP position, Mr Amidu on numerous occasions reels out names of those who were on his radar to be put before court for various reasons. But sadly, till yesterday, nobody has been convicted. But Mr Amidu hates to be reminded that he has failed Ghanaians including his own self.

Therefore, I am not appalled with his penchant to drag everybody into this unfounded frenzy of wild and unsubstantiated alarms here and there. If Mr Amidu is not accusing people within his outfit, he gladly picks the quarrel with some faceless government appointees. I have come to realize, it is a gimmick the SP deploys to earn national public sympathy, for terribly failing himself and the country. He diverts attention with such gimmicks and must be told the truth in the face.

It’s very clear to me Mr Martin Amidu has become a terribly tormented soul after running down the John Mahama’s administration with his empty allegations upon allegations and after being given this all important position, he has proving to be a failure than any other appointee in this rather malfunction government. He has simply reduced the position to a press centre where he releases pressers daily. If he is not talking about that appointee today, he is talking about that leader in the party. That’s how we know how empty leaders with problems behave.

Yet Mr Martin Amidu knows the solution to his problems, he has to stop chasing his shadows and focus on reality, the reality that he is fighting a lost war of attrition. He sowed the wind and he is now reaping the whirlwind, physically and politically. That he is today the equivalent of a political orphan is of his own making, after all, he actively partook in the destruction of his party and sent it out of government. The fanatical zeal with which he pursued that agenda is today starring right back at him and he must be willing to pay for his sins of yesterday.

Poor Mr Amidu has become a tormented soul since he aided the exited his own government that offered him many opportunities to serve in various positions in government out of power. He now presents with clinical manifestations of hallucination. He sees detractors even in the midst of his own family that is if he still has one. His troubled state of mind has not allowed him to lock down on one strategy in pursuit of whatever it is he is so desperate to achieve.

Our Special Prosecutor and antic-corruption crusader has now realised that making wild allegations are quite different from prosecuting people before the law courts. Like a disoriented avian attacking its reflection in a glass panel, Mr Amidu has lately been hurling himself like a projectile against the Akufo-Addo’s government and some of his appointees.

Only if he would listens to the wisdom of, Rajesh Goyal, instead of chasing his shadows, he should productively engage himself, both as a matter of responsibility being the Special Prosecutor and as an act of contrition, remorse, and remediation.

The writer is a senior journalist, Editor of The National Tribute Newspaper, a columnist with Ghanaweb.com and an activist of the National Democratic Congress (NDC). Contact; [email protected] or 0249726262

Why won't National Security operatives assault journalists i...
12 minutes ago