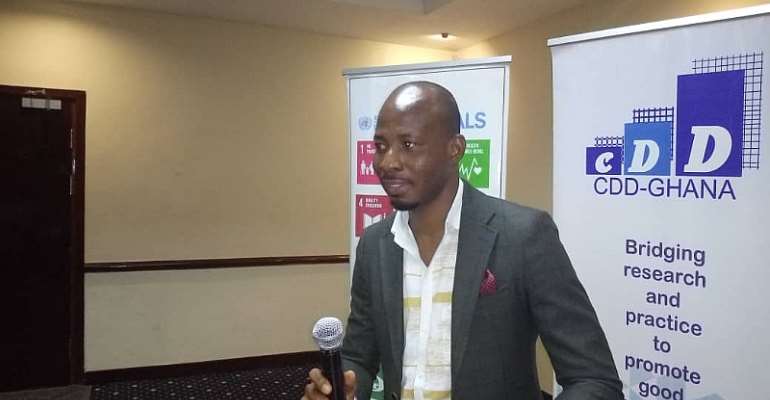 Following series of political violence that are been recorded daily in the country ahead of the 2020 general elections, a civil society activist, Kojo Impraim has warned against absolute silence on the development.

He has therefore called on Ghanaian media practitioners to stand up and speak against these violent activities.

He said since political violence has no political colour, and yet its ramification has no boundary, media practitioners and citizens must join hands, work together and collectively kick against all forms of violence in order to protect the peace and stability been enjoyed in the country.

"The security of this country is blinking, and yet we all know that peace has no political colour", he noted.

He made the call in Kumasi in the Ashanti Region on Wednesday when he addressed journalists drawn from selected media houses across the country at a training workshop on conflict sensitivity in reporting and peace building.

According to the Research and Development Consultant for Ghana Journalists Association (GJA), Ghana cannot wait for events to overtake the country in terms of violence and conflict mismanagements, before the right measures are adopted and implemented to protect the peace in the country.

"Let's talk about these issues because peace is very important ", he made a passionate appeal

Kojo Impraim called for concerted effort in tackling all ongoing security threats in the country been fueled by political parties and their agents.

"We don't want to wait till last minute. We need continues advocacy. We shouldn't take peace for granted. The media is the platform where issues are shared towards building social cohesion", he concluded.

The Ashanti Regional Chairman of GJA Kingsley Hope who welcomed participants to the workshop cataloged a number of activities in the country currently fueling political violence.

According to Hope, political vigilantism, kidnappings, and recent electoral violence at Ayawaso during the by- election had sent a wrong signal out there that the peace and stability in the country could be tampered with if not managed well ahead of 2020 elections.

He said whilst political vigilantism remains a challenge in Ghana, it is not a threat to only the country but the African regional block.

Consequently, he called for effective collaboration between journalists and other civil society organizations to wage a relentless war against political vigilantism and extreme violence been orchestrated by political party activists and their supporters.

"Security is a shared responsibility, but it requires civic action, that is why GJA is partnering with UNDP, CDD", he said.

Mawusi Dumenu, Research Analyst of CDD, who also addressed participants appealed to journalists to do evidence based journalism, adding that "A journalist is like that of a judge, that is why evidence based reporting is very very important".