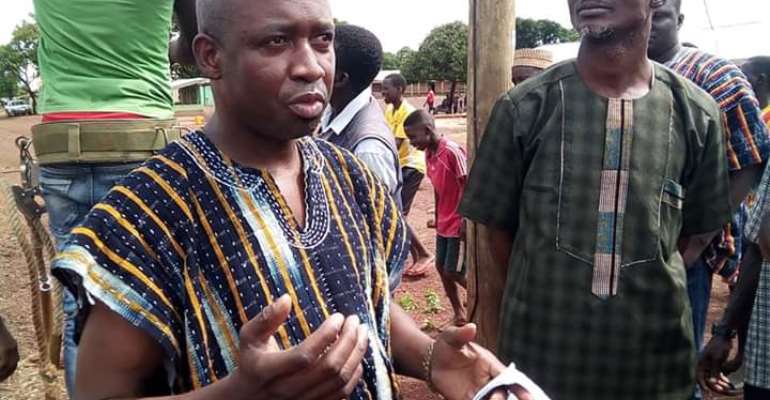 Addressing the Chiefs and people of Tulewe during the commissioning ceremony Hon. Mustapha said the Government through the Ministry of Energy and the Central Gonja District Assembly was committed to achieving universal Electricity coverage in the District and for that matter the entire country so as to improve the socio-economic wellbeing of the people.

He said the government was also committed to getting 83 other communities in the District connected to the national grid so as to improve the economic activities to enhance the living conditions of the people.

Hon. Mustapha said, “the contractor working on Adape, Agage, Yala, Kpalangasei, Nyantan, Dopopei, and Seidupei all in the Tulewe Traditional area has assured me he will resume work after Eid festivities so as to get the said communities connected to the National Grid, whiles works on Digma, Zowgu, Kopedeke, and Bonyagasei are at advanced stages of completion and will be ready for commissioning in the next few weeks"

Hon. Mustapha also opined that Nigeria camp, Adododeke, Jerusalem, congo, Kafulewurepe and BBC which are along the Black Volta and hard to reach will be connected to a mini off-grid solar system that will provide them with electricity.

The DCE appealed to the residents to use the electricity judiciously and cautiously, saying, "even though electricity is good for the development of communities as well as individuals socioeconomic development, it can also be very dangerous to mankind if not properly handled and for that matter you should always take precautionary measures to avert any misfortunes.”

Tulewewura Alhaji R. S Mahama Bonyanso I, Paramount Chief of the Tulewe Traditional Area expressed his gratitude to President Nana Addo Dankwah Akufo Addo's Government, “for the tireless efforts in ensuring that they also receive their fair share of the national cake”.

He also thanked Hon. Mustapha Mahama for his personal commitment to ensuring that they get connected to the national grid

The Tulewewura who is a retired VRA worker also said with the provision of electricity in the area, will attract investors who want to invest in the Agriculture sector since they have arable land good for crop production

The District manager of NEDCO Mr. Agyeiman Kabila advice the people of Tulewe on how to Conserve Energy and avoid illegal connections so as to avoid paying higher electricity bills.