Ghana’s Failed BRT System And Its Consequences On Public Life 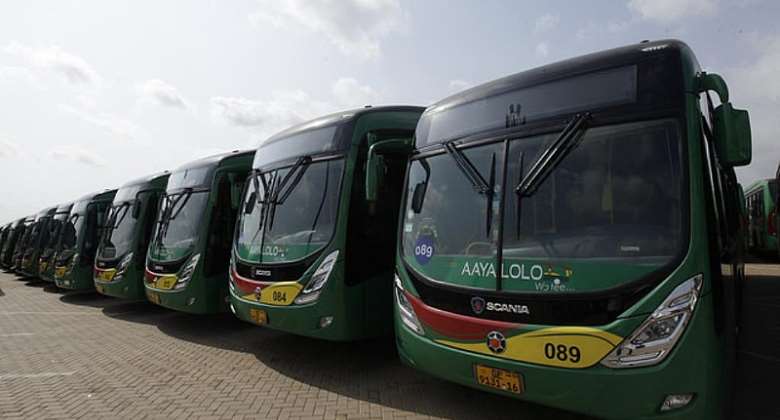 One of the frustrations of any ordinary dweller in Accra, Ghana's capital is rush-hour traffic. The traffic is sometimes so heavy to the extent that a trip that should last five minutes, end up taking close to two hours. Imagine, that you set out from your home fresh and energetic for the office in the morning only to burn two hours of your energy and fuel in traffic. You get to the office exhausted. This is sure going to affect your productivity for the day. Not only does it affect energy, it affects the pocket as long stay in traffic means burning more fuel.

So the quest for a decent public transportation system has been on for a while now. One that will discourage many users of private vehicles to drive to the Central Business District, because there will be no point in doing so as buses would be available to convey passengers from different parts of the city to the centre, at a fee.

A daily routine of almost everybody resident in this city demands transportation. A number of individuals going to work have to battle with waking up early to beat the traffic. And that's if you drive, but if you have no private vehicle that transports you around, then your problem of moving around in the city will worsen.

No car means you must wake up even earlier, get to the bus stop early, stand for a while waiting for a bus.You may think you are fortunateto see a bus arrive, but the arrival of the bus starts another struggle. You have to fight your way into it. In the meantime,the pickpockets will be alert to chance upon you just when you drop your guard. Your clothes may get dirty or get torn in the struggle to secure a seat on the bus. I am sure you can appreciate how stressful this situation can be. I dare say this stress may even add to the increasing cases of hypertension in the society.

This is the ordeal of the ordinary worker or trader in the capital Accra on a daily basis. The question is, can Accra ever get a proper transportation system such as the much talked about Bus Rapid Transport (BRT) which is functioning in the urban areas of our sister countries like Lagos in Nigeria, Johannesburg and Cape Town in South Africa, Dar Es Salaam in Tanzania?

BRT in Lagos on a dedicated lane

But these days Citi TV's War Against Indiscipline has become a thorn in the flesh of these 'bigmen.' Others who have no sirens, resort to driving on the shoulders of the road to beat traffic and many of them in parts of Accra have had to contend with the prying eyes of Citi TV's cameras and facing the law. The indiscipline sadly is a consequence of a dysfunctional system. And we must ensure that we don't tip over into an unruly society.

The routine is such that parents no longer have quality time with their kids on weekdays as they leave home when the kids are in bed and get back when the kids are either about to go to bed or already retired to bed. The family or social ramifications of this stressful life, all because of an inefficient transportation problem may be far reaching than we have imagined.

Others have proposed rail transport as solution to the problem, but that is a different conversation for another day.

On the Scania Ghana (the company that provided the BRT buses) website, the company noted that “in Ghana's capital city Accra, it is rolling out the most comprehensive and complete Bus Rapid Transit (BRT) system in the company's history. With 245 connected buses operating in their own dedicated lanes, the system is improving quality of life in one of Africa's largest cities. With a population of four million people, Accra struggles with the same problems as many other major cities in the world's developing nations.

“Some 70 percent of Accra's road network is congested with the number of cars on the road estimated to have grown by a factor of five in the past 15 to 20 years. In addition to the 245 buses, the BRT system in Accra involves long-term financing, an electronic cash-free ticketing system, a big, modern workshop for service and maintenance of all the vehicles, training for 600 bus drivers, and advice and support on starting up and operating the BRT system. The buses are also adapted for those with disabilities”.

With all these great features outlined to make the lives of individuals residing in Accra less stressful in terms of transportation, over 150 of the buses have been left idling at the New Achimota terminal with the excuse that there are no dedicated lanes for them coupled with financial and technical constraints.

The infrastructural challenges led to a downgrade from the BRT to the Quality Bus System (QBS). Partly because Accra lacked the strict infrastructural endowment to have all these buses on its roads. In certain areas it's just impossible to have dedicated lanes as the roads were already narrow and congested. In some other places, the cost of securing dedicated lanes was going to be too expensive as huge structures would have to be demolished to accommodate extra lanes for the sole purpose of BRT. So you have instances where the few dedicated lanes did not travel the entire length of the journey. The buses had to join the traffic at certain points, defeating the purpose of the BRT. This is clear that serious no due diligence was done by the Mahama-led administration before importing such large number of buses.

68 buses began plying the Amasaman-Tudu corridor. It was such a beauty and observers and passengers alike heaved a sigh of relief that finally a transportation system befitting of the capital's status had arrived. Market women, office workers, school children and the general public boarded the buses in such dignity and the usual struggles one often had to endure to get onto a bus were no more. The Buses were air-conditioned and neat and decent (obviously because they were new).

This excitement however was short-lived as operations came to a halt in October 2018 due to financial and technical hitches and also the operators could not fulfill the promise of getting passengers to their destination in good time, simply because, the buses had to join the everyday traffic at certain points in the journey.

Again, the Adenta terminal was built to house some of the buses that will travel from Adenta to the Central Business District (CBD) but till date nothing is happening there and the structure has become surrounded by weeds. To say it bluntly, the entire BRT arrangement now appears like a waste of resources.

Several measures have been put in place to revive the business again but these efforts don't seem effective enough to lift the project off the ground properly. About ten buses have been deployed on the Kasoa to the CBD route and fifteen on the Amasaman to Tudu stretch. Well, we can wait for a while and see how all these buses can be made to run on these busy streets of all regional capitals in the country if not only Accra.

In the first week of July in 2019, the governing board of the Greater Accra Passenger and Transport Executive (GAPTE) managers of the Aayalolo buses disclosed to Citi TV that it will implement a contraflow system for the easy flow of traffic on some selected roads. A contraflow system provides for traffic lane that flows against normal traffic.

The word 'contra' means against or opposite. A contraflow system is where a traffic lane flows in the opposite direction to the normal. After an inspection exercise to identify the shortfalls with the transport system, a board member at GAPTE Mr. Rudolph Beckley said “we are talking about a system which would enable the buses to move contrary to the original flow of traffic to allow the buses to arrive at their destinations faster.

Good idea, but will we have the discipline to enforce this 'contra' flow idea to ensure there is sanity on our roads such that we will not have other vehicles following the buses in the 'contra' direction, endangering everybody's life? This is because, even without contraflow, we see so called big men in society diving against traffic much to the shock of everybody.

Government seems to be battling with how to put these buses into good use whilst some African countries who have implemented the BRT system are benefiting immensely.

Most of the buses are grounded but according to my sources they are being serviced by Scania because it's part of the package the country bargained for. They have been grounded for about three years and the big question is for how long will the buses will be left under the mercy of the weather? Soon they may begin deteriorating only for the State to later auction them for a pittance, while many of our country men and women struggle to get a decent means of transportation to navigate their movements in the capital.

Latest Photo Reports
Catch up with all the political quotes from our politicians.
Advertise here
More Article
ModernGhana Links
Ghanaians celebrate Dr. Justice Issah Musah Suguru, a United Nations fellow
UW/R: Traditional authorities, CSOs, youth groups and others support the call for non-partisan election of MMDCEs
The future of Ghana depends on the youth
Meet the black family that once asked U.S. President Joe Biden to support Immigrants
C-KADD Global’s Reflections On 2022 Budget
Transitioning into cybersecurity with Zero IT background
Good Governance and the Fightback Against Africa’s Economic Slowdown
Ghana Can Become A Regional Maritime Hub Through Digitalization
Mr. White Man: A Knock on the Door of an American Ambassador
TOP STORIES