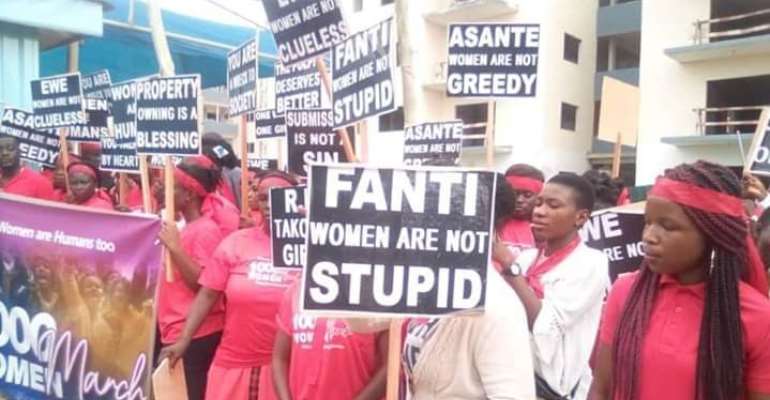 The Tema branch of the Ghana Journalists Association (GJA) has called for a full-scale investigation into the assault of a Daily Graphic reporter, Della Russell Ocloo, on Sunday at Sakumono.

She was assaulted by some agitated members of the Glorious Way Church when she covered protests against the church’s pastor.

The GJA said it considered the attack as a “reprehensible and uncivilized way of addressing such a case in a democratic dispensation.”

The church’s pastor, Prophet Badu Kobi, made a controversial comment about Asante, Fante and Ewe women within the context of marriage.

Ms Ocloo, the Tema reporter of the Graphic Communications Group Limited, went to the church on Sunday, August 4, 2019 as a follow up to a protest march in a bid to find out the church leader's reaction to the women's peaceful demonstration against his controversial comment about Asante, Fante and Ewe women and how they behave in marriages.

According to the Daily Graphic, Ms Ocloo decided to sit through the church service and at a point found that some members as a sign of reverence, were not only bowing down to the prophet, but touching his shoes for blessings, and thus decided to record.

While at the church, Ms Ocloo decided to stay and see if the Prophet will react to the issues and the demonstration.

While there, the Prophet reacted and made references to tribes. After preaching, Prophet Kobi walked through the aisle and put his hands on people,” the newspaper added.

In the process, majority of the people knelt and held his shoes while he blessed them.

So, Ms Ocloo decided to record it because she found that fascinating.

She was spotted by one of the men, whose name she could get as Amofa, apparently part of the security detail of the church leader.

He walked her out of the auditorium and when they got outside, asked her to delete the video but just when she was about to do so, their interactions attracted other members of the church and about 15 men reportedly surrounded her.

She said she was, however, saved by a man who said he was a national security operative who approached her and asked for her identity card (ID). Having verified her identity, the man also asked her to delete the video.

However, before she could do that, Amofa who had earlier left the scene, returned with two policemen he had brought to effect her arrest.

According to the Daily Graphic, Ms Ocloo was heckled.

The Ghana Journalists Association, GJA has received with pain in our hearts and afflictions to our souls another attack on a journalist who was on her constitutionally permitted duty in the interest of the nation.

Della Russell Ocloo, Tema Regional Correspondent of the Graphic Communications Group Limited was on Sunday 4th August 2019, allegedly attacked and molested by some agitated members of the Glorious Way Church pastored by embattled Prophet Badu Kobi at Sakumono in the Tema West Municipality.

According to Della, she went to the church to follow up on a protest march by members of the 1000 Women's March in a bid to find out the Pastor’s reaction to the backlash flowing from his denigrating comments against Asante, Fante and Ewe women.

We consider the attempt by the church members to attack her reprehensible and uncivilized way of addressing such a case in a democratic dispensation.

Mob injustice has been a grave cancer wreaking havoc on innocent lives and so for members of a church professing to be worshipers of a merciful and forgiving God to engage in an act as narrated by the journalist can at best be described as unchristian, ungodly and an affront to the Holy word of God.

We urge the Christian Community, Christian Council of Ghana, the Pentecostal and Charismatic Groupings to call Pastor Badu Kobi and his congregation to order and guide them to the narrow path of righteousness.

What even pierced the soul of the GJA is the harrowing attempt by a woman of the church to use a club fixed with nails to attack Della.

The Association in Tema is sad that despite numerous efforts with stakeholders and appeals to citizens to end attacks on journalists the dastardly act stills persist.

The conduct of the police personnel to the scene also leaves much to be desired.

We are constantly reminded of the phrase “the police is your friend”. However the practice on the ground in terms of police-civilians relations is nothing to be proud of.

Why should the police struggle with a harmless lady to seize her phone and bag? Why was she forced to write a statement when she was insisting on having her lawyer present before such an action?

We condemn the attempted attack on Della and call for a full investigation into the case.

GJA wants to know the role of the police in the entire narrative and why personnel were unprofessional in handling the case. What informed the police decision to detain the reporter? The Association demands answers.

The GJA hereby encourage journalists to be safety conscious in the performance of their duties.