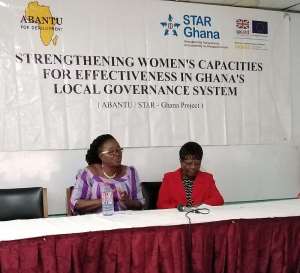 Abantu for development has called on the state, media and all stakeholders to give priority to initiatives and actions aimed at supporting women's increased representation in district assemblies.

Since the organization of district assembly elections in Ghana, women have failed to attain the 30% UN recommended minimum threshold in representation in the assemblies making gender-based exclusion in these structures a major deficit inequity in participation.

Currently, only 282 women serve as elected members of district assemblies out of a membership of 6061 nationwide.

According to ABANTU for Development, a gender and policy advocacy Non-Governmental Organization (NGO), Ghana’s quest for a full democratic local government and a progressive development agenda cannot be achieved unless both males and females are empowered to actively participate.

ABANTU notes that the continuous historical low levels of women’s representation in governance, both at the local and national levels, is a national indictment and represents the failure to take the required decisive initiatives to address the multiple structural, functional and other factors that make it difficult for women to effectively contribute to national development efforts.

"As a country, the issue of parity in women's participation in policy-making structures should be a core concern in strengthening democratic culture".

Mrs. Magdalene Kannae, Head, Gender and Social Development Centre, Institute of Local Government Studies said, the relevance of women as a necessary investment in the local government processes in the achievement of the United Nations Sustainable Development Goal (UN-SDG) five (5) ― which identifies gender equality and the empowerment of women in political, economic and public life as goals of, and tools for, sustainable development.

She added that the up-coming Local Level Elections in Ghana, December 2019 is another opportunity to deepen efforts to promote gender sensitivity in the elections processes and an invaluable possibility for the realization of gender equality.