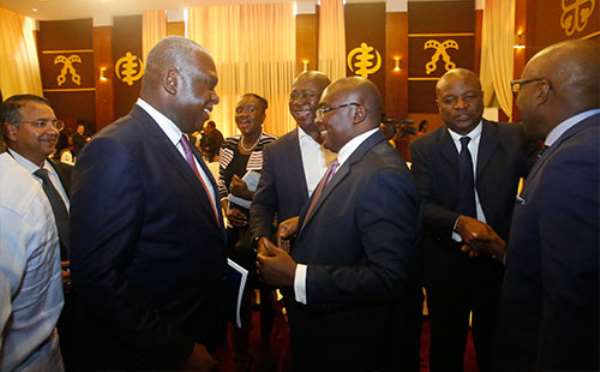 The initiative is being undertaken by the CEOs Advisory Group on SDG established by President Akufo-Addo to help generate resources to fund projects.

The selected CEOs from various corporate organisations in the country have set for themselves to generate GH¢1 billion within the next five years into the Green Fund to provide sustainable energy and other commercial activities. This is also expected to create not less than 100,000 jobs along the line.

The CEOs have also committed themselves to set up what they call the Delivery Fund into which corporate entities would be paying 5% as part of their corporate social responsibility.

Speaking at a breakfast meeting held at the behest of President Akufo-Addo at the Jubilee House in Accra yesterday, Vice-President Dr. Mahamudu Bawumia said the President was fully convinced that the two funds could be a game changer in Ghana's quest to achieve the SDGs.

He called for hard work to be able to make it happen, saying “the President counts on your support and that together we can achieve this noble objective.”

The Vice-President said, “It is unacceptable that our people continue to suffer extreme forms of poverty and hunger, and it is not right for the people to die from preventable diseases, suffer inequalities and injustices.”

It was for this reason he said the President attaches the greatest form of importance to the goals and cherishes so much the work that the CEOs are doing towards the implementation of the SDGs.

“This is because of what the SDGs represent for the development fortune; the President is fully committed to making Ghana a shining example in the implementation of the SDGs but stated that without the robust support and deliberate efforts towards scaling up private sectors engagement and investments, this acceleration would be a pipe dream,” he added.