Letters to Rimbaud, 127 years after his death 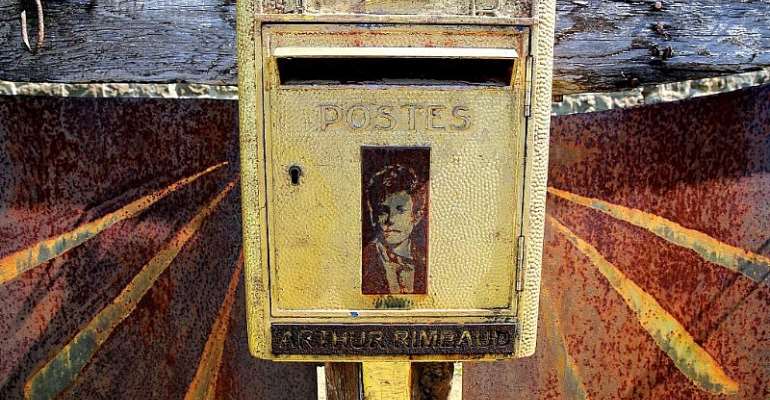 A renewed interest in the French poet Arthur Rimbaud has resulted in a pile-up of mail sent to his grave. Two or three times a week mail is delivered to the yellow postbox inscribed with the poet's name outside the entrance to the cemetery in Charleville-Mezieres where he was buried in 1891.

Rummaging through a stack of shoe boxes in which he keeps the correspondence, the cemetery's caretaker Bernard Colin pulls out a handwritten letter from a man named Philippe who is contemplating the "living shreds of my youth, the last promise of my miserable existence".

Some of those trying to commune with the dead poet seem to find solace in writing to another tortured soul, who stunned the Paris literary scene as a precocious teen attempting to chart the unconscious mind in poems striking for their modernism.

Some letters contain declarations of undying love: "Rimbaud, even if you are no longer there, know that I will love you forever," reads one. Another promises him "the sun, moon and stars".

Colin never fails to be moved by the emotions expressed: "People confide in Rimbaud about their disillusionment. He is their confidant. They talk to him as if he were still alive."

Rimbaud revival
The steady trickle of letters and visitors testifies to the renewed interest in the poet, who passed away at 37 after a rollercoaster life that included an opium-fuelled affair with fellow poet Paul Verlaine as well as a stint as an arms dealer.

When Colin moved into the caretaker's lodge 37 years ago his predecessor told him "no-one is interested in Rimbaud."

"That has certainly changed," he said with a smile.

So too has the regard in which Rimbaud is held locally. As a teen, the poet railed against the strictures of small-town life in Charleville, a town near Belgium, and he continually plotted his escape.

Yet throughout his short life, he would invariably return home in times of crisis, such as when Verlaine pulled a gun on him during a quarrel in Brussels and shot him in the arm.

The self-styled prophet struggled to gain acceptance in his hometown, which studiously ignored him up until the 1960s when counterculture figures such as The Doors' Jim Morrison began acclaiming him as their idol.

Cottoning onto the tourist potential of brand Rimbaud the town in 1969 got a Rimbaud Museum, and in 2004, on the 150th anniversary of his birth, a house where he lived was transformed into a commemorative space.

Visitor adoration
Some visitors to Charleville cheer on Rimbaud's youthful excesses by leaving empty bottles of absinthe or cigarettes packs on his grave.

Others take his example further: Colin said he had surprised some couples having sex behind the twin white headstones that loom over the family grave.

Among the devotees to have visited the grave recently are American singer-songwriter Patti Smith, who left behind a guitar plectrum, as well as French rocker Hubert-Felix Thiefaine and former Prime Minister Dominique de Villepin.

In a sign of the poet's global appeal, the cemetery also receives a large number of Asian visitors, and Colin welcomes them all on behalf of the deceased, to whom he feels a degree of kinship.

"After so many years I feel that I know him almost as well as my family," he said.

Covid-19: Ghana not part of countries banned by Netherlands ...
46 minutes ago