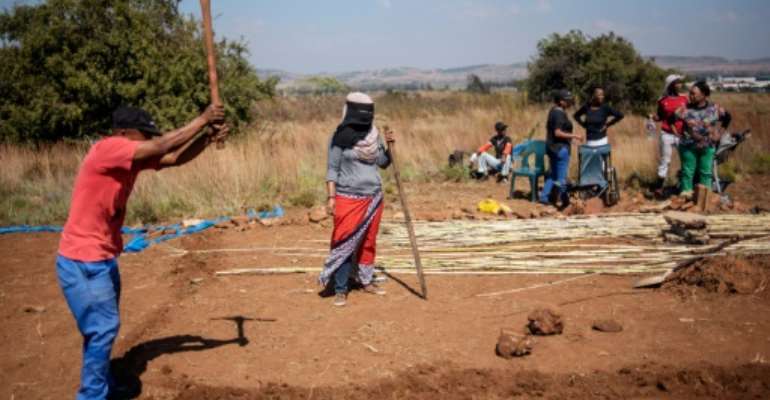 People take part in a land grabbing action near Johannesburg as the government embraces enforced land reform as a flagship policy. By Michele Spatari (AFP/File)

A South African advisory panel on Sunday backed land redistribution without compensation for owners, but only in limited circumstances, as the government pushes ahead with the controversial policy.

President Cyril Ramaphosa established the panel of experts last year after he took power and embraced enforced land reform as a flagship policy, despite warnings that it could scare off investors.

"The Panel endorses the proposed policy shift towards using the provisions of the Constitution to expropriate land without compensation," its report said, adding "this need not, and should not, be applied in every case."

Parliament will this year debate changing the constitution to strengthen the legal case for land seizures.

The panel also called for clarity in a draft "expropriation bill" that suggests zero compensation only if land is held for "speculative purposes", is owned by the state, has been abandoned or has received government subsidies more than its worth.

The panel said that property owners who bought land after the end of apartheid rule in 1994 should be treated differently to those who inherited land that was held under the white-minority system.

Forced land redistribution has become a central policy for the ruling ANC as the party tries to win back support from poorer black voters who still suffer harsh racial inequalities 25 years after the end of apartheid rule.

The party has vowed to change the constitution to make it easier for land to seized -- largely from white owners -- without payment.

Ramaphosa has said reform would start with state-owned land in urban areas being released for housing, and would not damage the country's weak economy.

The advisory panel said that data on ownership was still incomplete and called for a national audit to pin down who owned land.

The main opposition Democratic Alliance party rejected the report's recommendations "with regards to land expropriation without compensation and other untenable suggestions."

"The (panel's) majority endorsement of land expropriation without compensation will further batter our ailing economy," it added.

The far-left South African Economic Freedom Fighters (EFF) party made its mark with voters by pushing for radical land redistribution -- a policy now adopted by the ANC.