Freedom Of Speech And The Professional Soldier 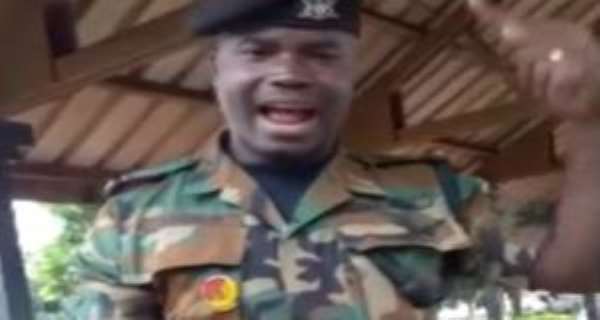 Professionalism is the key to any job, but perhaps more so when it comes to the military. The nature of armed conflicts that humans are faced with, its brutal and destructive force, requires that those who do the fighting, do so with extreme levels of discipline, commitment, and skill. Such requirements are the indispensable qualities of military professionalism.

One could mumble and complain about commanders and even the President if he choose to or if that is all he want to, but it must be noted it will be dependent on the situation, and forum. The fuss which was making headlines about free speech with regards to the said "Lance Corporal Wassa" has no place in the military and the earlier people understood the better.

Soldiers are limited in what they can say about military commanders, and this includes the Commander-in-chief. That's the bottom line. You obey the lawful orders of your commander-in-chief and you do not criticize his policies in public, any more than you criticize your CO or immediate superior.

People in the military are entitled to vote and even, to donate money to political campaigns, but they can't run for office or engage in active campaigning that conflicts with their role as subordinates to the authority.

It is a fact that "freedom of speech" is a guaranteed right for all Ghanaian citizens, in accordance with the Constitution. However, members of the military do face certain context-based restrictions on how they exercise that right.

The reality is that "no officer or man" in the armed forces has a right, be it constitutional, statutory or otherwise, to publish any information or make any statement which will imperil his unit or its cause.

Soldiers are not just protectors of the land. We are peace keepers. We act and serve as beacons of hope. We are the first responders to risky situations. We are life-savers during events of great distress and disasters. We are brothers and sisters of our fellow Ghanaians and we must remain steadfast and committed to serve others.

Being a soldier is never an easy job. More often than not, we are apart from our families, on duty or performing task in a hostile field elsewhere, reporting to work even on holidays. But we must never give up. We work not just to serve the country, we have a very important charge and commitment for both active and non-active soldiers to seek to work to uplift others, especially our fellow colleagues. It remains our business to be mentors and work towards developing the character of the Ghanaian soldier whether actively serving or retired.

There is a great need and it's about time the military put in place a mechanism where experienced "Officers and Other Ranks are invited as resource persons, to help motivate and empower NCOs and inculcate in them the virtues of discipline and passion for service.

Every soldier as a representative of the military should strive to embody the core values of honor, patriotism, and duty. Anyone who has been a soldier must continue to support any Transformational Roadmap that will contribute to the attainment of the Arm's mission and a vision to be world-class Military.

Every occurrence and situation that are soldier encounter must be a way of approaching a problem. It should be a learning opportunity to become better ourselves. Like the situation which the Lance Corporal found himself. We need to learn to accept responsibilities and accomplish it to the best of our abilities.

To conclude, the Military and Free Speech are at variance as they operate in different theatre. The advice for practitioners of free speech should not consider enlisting into the military in the first place.

For such individuals, the military perhaps will not be the best career choice for someone interested in the vigorous exercise of civil liberties. As countless training instructors/drill sergeants have informed new recruits, "we are here to defend constitution--not to practice it."

Because views and issues valued by the civil society - such as respect for the individual, independent thinking, skepticism about leaders, or the nobility of principled dissent have no place and new thrives in a military environment. The reasons are obvious - self-sacrifice, discipline, order and obedience to authority tend to be emphasized instead. For every soldier who wishes it were otherwise, the soldier must understand that there is an authority which will always bark at him.

Therefore those seeking to create the freedom of speech virtue that, the Lance Corporal at center of the brouhaha is being denied his rights are wrong. Whether one is an officer or other rank, you relegated your rights and liberties the moment you enlisted with the military.

Without respect for the chain of command, a military organization would simply disintegrate in the heat of battle. So it is not surprising that the free speech rights of soldiers are sharply curtailed when it comes to criticizing their superiors.