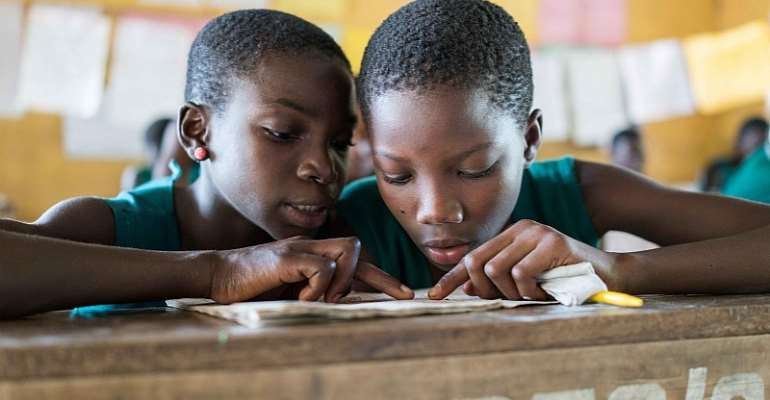 English Language is not the measure of one's intelligence or imbecility. But it is first in importance among the competencies and skills Ghanaian basic school pupils must acquire. With the apparent exception of the Ghanaian languages taught in the classroom, all other subjects are clothed in English, as per the GES rule, from upper primary to PhD level. Therefore, it is important to equip pupils with all the necessary assistance to elevate their competency in the language right from scratch.

Speaking is a skill. Speaking of English language is no exception. But just like any other skills, constant practice makes pupils perfect in English. Pupils who can read, interpret and understand a text in English has the propensity to do extremely well in all other reading subjects.

However, Ghanaian Basic Schools have the most and shameful reputation for being the last and the least with English speaking culture on campuses despite having the professionally trained English teaching staff to assist pupils.

Such a culture, as shameful as it is, has been blamed on a host of factors. Large basic school population, poor teacher effort, lack of reading materials except textbooks and bla bla bla just to name a few of the alleged variables.

I take a different view, however. I argue that the situation is unsurprising, inadvertent but correctly decided and consistent with the geographical placement of teachers across the state. I do not address the issue of teacher postings but leave that to other writers and future posts. I would also like to raise only observation about the canker, as well as a solution.

Also, it is not the place of this short post to address all the scholastic arguing.

Rather, here I put forth my view.
First, the lack of regular English speakers in our public schools is unsurprising but consistent with, as I have said, the distribution of teachers in the nation. As I have observed, as well as from other sources, teachers who are posted to work in their tribal zones often fail to inculcate English speaking habits in their pupils. This observation is confirmed by the understanding that, when pupils and teachers have a common native tongue, there is little or no effort for communicating in the L2.

It is fair to say, however, that, when people who share a common indigenous language meet, few thinking people would choose a different alternative medium to communicate. Thus, in my view, the spread of vernaculars in our public basic schools and SHS has to be seen as the byproduct of the teacher placement method and correspondingly calls for efforts to change the way the system functions.

I argue that, it would score a goal if teachers are placed outside the spheres of their ethnic communities. To set, for the purpose of illustration, an example, teachers of Akan parentage ought to be placed in a non Akan speaking community. A teacher of Ewe nativity, equally ought not be posted in a community that speaks Ewe. Finding themselves in foreign localities as in the example above should make teachers have interactions with their pupils only in the prescribed language of the Ghanaian academia. Had GES done so, it would have sent teachers to communities whose languages they do not speak and understand. Certainly, English would be the only common bridge of communication between teachers and pupils in teaching, learning and all other situations.

Certainly, GES may wish to change the rule. For GES to do so, it would have to have the background information of teachers. It needs to do so explicitly, by taking the difficult decision to amend the policy it use on the posting of teachers.

Unless this is done, in my view, the scholarly objective of preparing children to take up tasks in a world where English employs, pays and fires cannot properly be achieved.

Inside Politics: Political Quotes
Catch up with all the political quotes from our politicians.
Sponsored
More Article
Modern Ghana Links
Our 'whom you know' canker
Rawlings, The Tribute: The tenderness in his toughness
Ghana's unstable building problem is about more than lax regulation
How Kenya's new personal data protection law could affect researchers
Pasha 92: How we discovered two new giant radio galaxies
How young Kenyans feel about farming goes against conventional wisdom
Jonas Gwangwa embodied South Africa's struggle for a national culture
The approved covid-19 vaccines: Series of clinical trials is the way to go in Ghana
Why wait till I am no more?
Election Reports Quotes Dossiers
TOP STORIES