With "Adolf .H" On The Highway: A German Trucker Provoked With Nazi Decoration 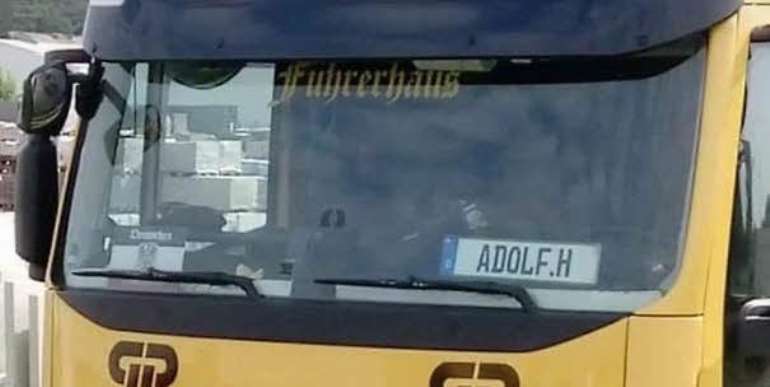 A Truck on the highway with extremely questionable logo ADOLF .H

Trucks on the highway with extremely questionable logos, "ADOLF .H", now the trucker has become conspicuous.

His employer is very disappointed.
With "Adolf H." on the highway: Trucker provoked with Nazi decoration, an extremely questionable lettering behind the front windscreen of a truck causes swirls. The driver openly exposed his individual characteristic.

In the German town, Halle - The photo of a truck in these days provides much horror that is far beyond Saxony-Province. Because behind the windshield of his truck in the East German town Halle, the driver had mounted a clearly visible license plate. The letters "Adolf .H" were visible for all road users.

Whether the driver is actually called "Adolf .H", that is not known. But the name used reminds everyone too much of the darkest days in German history. Especially since one could observe the glorification of National Socialist ideas right at numerous other places on the truck.

Truck driver has "Adolf H." in the "cab"

Thus, up in the truck in huge letters, a text centered to a composition and surrounded by ornamental embellishment. To interpret this as a sign of left-radical fantasies would probably not come to anyone's mind. And the truck driver took another step in the dubious decoration of his cab. As if it was not enough, the driver had also in his cabin a German second world war flag behind the passenger seat of his truck. However, that is not prohibited, but the use of this flag is also very widespread in right-wing to right-wing extremist circles.

If anyone has taken (the questionable) photo of the truck is unclear. But it is clear that it has now reached the owner of the truck. And thus the employer of the man who drove the truck. It is the company Papenburg in Hannover. And its CEO is angry about this incident. "On the same day, the vehicle was released by the disposition, because for us the removal of all symbolism had priority," said Angela Papenburg the "Central German newspaper".

Now also the employer of the Truckers expresses itself

The driver now has to expect very serious legal action. The company Papenburg has also announced that now all trucks should be checked for right imprints and decoration. "Such behavior is not tolerated in our house," says the management.

It is not the first time that questionable contents have been deposited behind the windshield of a vehicle, which is easily visible from the outside. This is how the police came under fire in the Thuringian town of Jena two years ago. In a police car was clearly visible an issue of the right magazine "Compact" appropriate. A violation of the neutrality requirement of the police.

Not the first incident with questionable content behind the windscreen

And another lettering in a vehicle came at the end of 2017 in the headlines - in the police vehicle, in East Germany. On the seat cushions of a new special vehicle for the police "Special Operations Command" (SEK) and "Saxony" were each embroidered in Gothic script. That this did not correspond to the design guidelines of the police, was then decided quickly. It was not clear how the Plate could make it into an official police car.

On the other hand, it is clear: "Adolf .H" no longer drives over the German Highway. At least not the trucker who is now showering with highly questionable logos through Germany.

The author has 675 publications published on Modern Ghana.