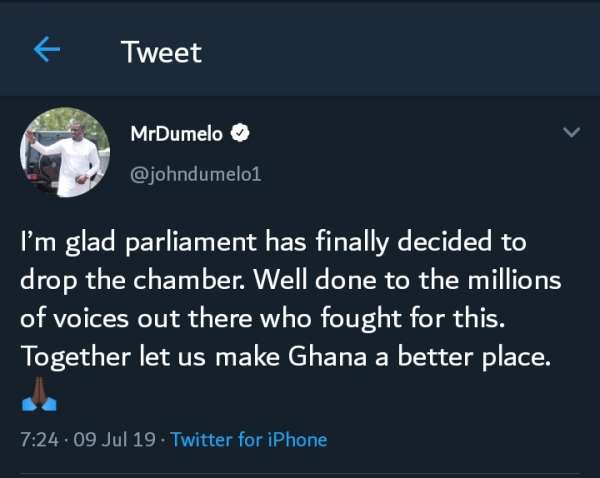 Celebrated Ghanaian Actor, John Dumelo has added his voice to the much talked about #DropThatChamber which has gained momentum in the country.

According to the actor, he is glad the Parliamentaries have reconsidered their decision to finally drop the controversial $200million chamber.

Mr. Dumelo added that the decision is a step in the right direction and called for all hands on deck in making Ghana, a better place.

In his tweet sighted by ModernGhana, the actor noted, "I'm glad Parliament has finally decided to drop the Chamber."

The actor also commended Ghanaians who took to social media and other mediums to kick against the proposed project.

"Well done to the millions of voices out there who fought for this. Together let's us make Ghana a better place," the tweet added.

Parliament has come under heavy criticisms and pressure ever since the proposed 450 seater chamber made waves in the media. This generated mixed reactions from sections of the public on social media.

It is emerging that although Parliament has agreed to cancel the proposed deal, rumours are that the decision go drop the project is being given a second thought.