Asylum Laws: The German House Of Representatives On Migration Package 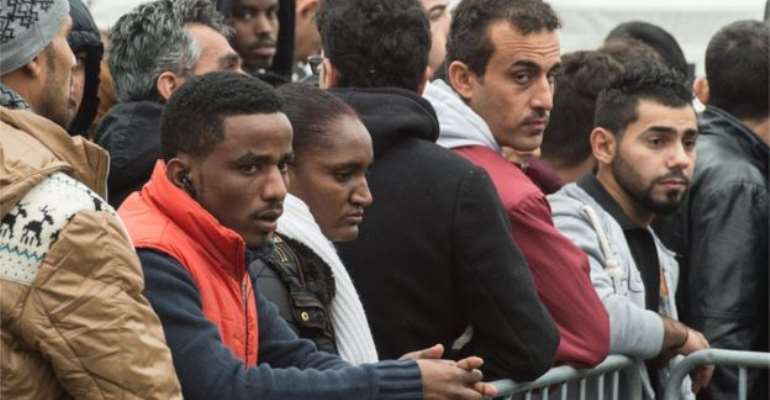 The German house of representatives (Bundestag) has passed the legislative package on migration and asylum. What changes for asylum seekers, who benefits from the reforms? Answers to the most important questions.

Despite fierce criticism, the house of representatives (Bundestag) on Friday approved the migration package of the Grand Coalition. The total of seven laws are intended to regulate various aspects of immigration.

Among other things, the controversial "Orderly Return Law", which regulates a tightening of the asylum law, is part of the package that has now been approved. At the same time, the Law on the immigration of people, is intended to facilitate the immigration of foreign workers.

What changes for asylum seekers?
Immigration detention: In the future, deportation candidates should also be able to be accommodated in regular detention centers. But they have to be quartered separately from normal prisoners. The conditions for departure custody are already given, if the specified departure date is exceeded by 30 days. For the first time, the authorities are granted a nationwide right to enter apartments in search of deportees.

Anchor Centers:asylum seekers should stay here for up to 18 months instead of the previous six. For families, six months remain. Asylum seekers from safe countries of origin as well as the so-called participation deniers and identity deniers are to be held longer.

Identity Defectors:The law provides for the new status of "acquiescence for persons with unexplained identity" and anyone who tries to prevent his deportation by deception of the authorities. Those affected face residence restrictions, a work ban and fines.

Residence Permit:Recognized asylum seekers may continue to be required to live with restrictions. However, the restrictions must not lead to Ghetto formation. The corresponding law is limited in time.

Will more people be deported in the future?
At least the federal government hopes for that. Above all, the Union sees great need for action after more than every second deportation failed in 2018. It is however, rather unlikely that significantly more rejected asylum seekers will be deported without toleration.

In some cases, the reduced barriers to exit custody may prevent anyone from absconding shortly before the scheduled deportation flight schedule. Nonetheless, the project will not change the fact that some countries of origin of the Asylum applicants are less cooperative in identifying and returning their citizens.

What about rejected asylum seekers who have found work?

Those who have a steady job, make their living over a longer period and speak German should receive a "tolerance". They are allowed to stay that way. However, this rule remains limited to so-called old cases. Only those who entered before 1 August 2018 can receive "employment toleration".

In addition, people without a residence permit who have started an apprenticeship receive a reliable stay-perspective. That is not completely new. The "education toleration" is now extended to certain helper professions.

For whom is the access to Germany easier?
In many industries there is a shortage of staff. installers, programmers, nurses - the list of trained professionals that is lacking is long. Although EU citizens are already allowed to work in Germany, they do so in large numbers. But they alone will probably not solve the problem of skilled workers.

Therefore, the entry requirements for skilled workers from other states should be relaxed somewhat. The previously applicable restriction on shortage occupations is eliminated. In addition, the employer no longer has to prove that he has not found a German or an EU citizen who could do the job.

Qualified migrant workers can come to Germany for a short time to look for a job. So far, an employment contract is a prerequisite for entry.

Why is the package controversial?
Above all, criticism has triggered the "orderly return law". Pro-asylum called it the "cut-off" law. Together with 21 other organizations, the association submitted an open letter to the German house of representatives (Bundestag). The letter described the migration package as "constitutionally most questionable and inhumane".

Deportation detention is not a criminal detention and should therefore only take place in separate facilities. The law would "permanently exclude many refugees from participation in social life, disproportionate sanctions and an unrestrained outlaw.