Torture Home 1 ...When A Man Of God Decides To Kill In An Orphanage. When Your Saviour Is The Enemy 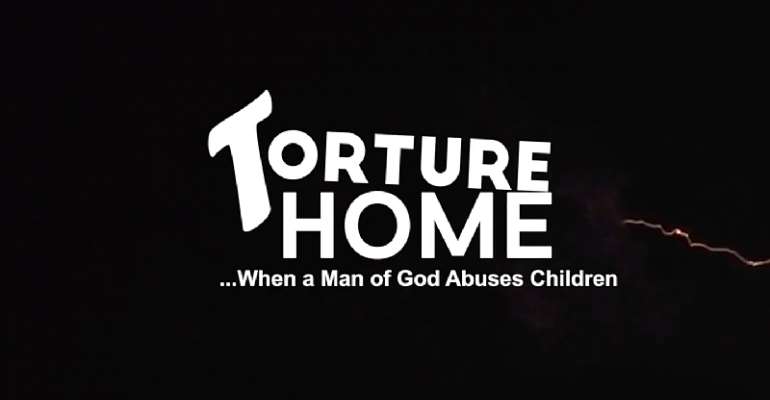 Dedicated to ensuring decent development and discipline for deprived and destitute children, the Echoing Hill Village has descended into moral decrepitude that defies all description; descended into disheartening and deplorable depths of depravity, destitution, and decadence. The hills only echo to the dreary din of debauchery; it’s the very definition of dereliction and desolation!

Death Threat
The General Manager of Echoing Hill Village Orphanage, Rev Lawrence Lamina, was captured in a secret camera attempting to stab one of the children of the orphanage, as caretakers restrain him.

Knife-wielding Rev Lawrence Lamina was seen being held back and at a point pegged down into a chair by some of the caretakers who tried desperately to prevent their boss from carrying out his threat to kill one of the children in his orphanage.

The victim, a little boy identified only as Kuchi, had broken into the home’s store room and stolen a few items, a normal adolescent delinquency which, ironically, the reverend minister/philanthropist considered as a crime punishable by bloody death.

The man of God had overpowered the poor boy by throwing him onto the ground, and stamping on his head repeatedly. Reverend Lamina then crouched over the boy with his foot stamped on his head in the posture a butcher ready to slaughter an animal.

Luckily for the boy, his abuser did not have a knife in hand, and unfortunately for the blood-thirsty reverend minister, his subordinates at the orphanage gathered courage to intervene when he went and armed himself with a kitchen knife.

Amidst the jostling with the staff, Rev Lamina swore to kill the traumatised boy, adding that he could produce evidence of the boy’s offence to defend himself, should that become necessary.

When finally let loose the General Manager, who is also a Reverend Minister at the Hope Community Church, descended on the adolescent and beat him mercilessly. Now, the caretakers held back the victim, advising him not to fight back.

After he had pummelled Kuchi to his satisfaction, he asked the staff to arrange for the boy to leave the home, because he did ever want to set eyes on him. This was after one caretaker had suggested that they detain the boy in the home’s prison and later banish him from the home.

Reverend Lamina: I had to beg and invest money, money I haven't yet recouped, and you seek to disturb me, why? Do you want to kill me? I'll kill you first. Do you understand?

Reverend Lamina: No, no, no. this one is an armed robber

Female Caretaker: If that is the case, then take him to the police station.

Reverend Lamina: I won’t take him to the police station.

Reverend Lamina: Who should punish him? I said I don’t want him in this house again.

Female Caretaker: Okay, he leaves this place after he's been released. He's bad luck, you might hurt him if you persist.

Inhuman Punishments on Inmates
In a related incident, Reverend Lamina and some of the caretakers were filmed meting out various forms of inhuman punishments on the children. These callousacts included Rev Lamina asking some kids to slap themselves, caretakers hitting children with sticks, knocking kids in the head and detaining children in cells for long hours and sometimes, days.

In the video, the Man of God was seen instructing some kids accused of sodomy to slap each other for the offence. Those that were not able to slap to the Reverend's satisfaction were taught how to do it properly by Mr Lamina stepping with a sample hefty slap. Sometimes too, he asked another kid to demonstrate it.

Some of caretakers were also seen vigorously knocking on the heads of the poor kids or beating them with sticks for various offenses. These offenses include playing hide and seek, failing to join the gathering to receive gift items or failing to help carry donated items to the store room.

“He hit me with a cane. I told him we do laundry on Saturdays that's why I went to sleep. He refuses to live here with us. Why does he then come around to beat us?” one of the children said while sobbing after an abuse.

“You're walking around here aimlessly while we've received parcel”, a caretaker remarks and proceeds to beat children for not being busy.

“Some time ago, pastor instructed Kwaku to give 12 strokes of lashes to whoever he sees indoors whenever there was a donation, party, or program here”, another boy also narrated.

Reaction from Rev Lamina Lawrence
When the Reverend Minister was contacted for his side of the story, the director claimed that only himself and the house father or mother has the permission to canechildren in the home. “As I said, only the leadership (has been) given the mandate and personally I caned them”.

He further said that the children in the home are not beaten or caned as a form of punishment for fighting or stealing or for any other reason apart from been late for school. “As I said, only the leadership (has been) given the mandate and personally I caned them. Not in terms of may be stealing or fighting or that kind of (reasons) but it’s like they need to go to school by 7 o’clock. You need to wake up by six, get ready and then go to school but (by) 7 o’clock they ‘ll be still sleeping. the cane and then cane them”, he claimed.

He later however admitted in another statement that they cane children when they steal. “Ah! If someone steals, that also is a serious issue because one of our rules says we don’t steal. So, for that one too you take some canes because we don’t want you to go out and become an armed robber or to join a gang and (be) stealing”. This was after he had claimed that he only asks extremely stubborn children in the home to only work till they are tired of working and ready to turn over a new leaf. “one of the particular ways personally I do is, when a child becomes so much stubborn, instead of giving beatings or spanking, I’ll rather give a work to the child to do on the premises. Sometimes, I like them to wash the dishes. Sometimes, I like them to do sweeping. Sometimes I like them to go with the adults in the bathrooms. So, I discipline them by asking them to work with the adults. So, that’s some of the discipline or punishment I give to the children. I’ll give to the stubborn ones. And the more you keep being stubborn, you’ll be working every day. And if you don’t want to be working everyday then you must behave well. So, that is the way in train my care givers to do to the kids when they misbehave”.

Rev Lamina also said that one must be with them to understand and be able to know when a punishment can be described as an abuse. “But in some cases the caregiver tries to discipline the child but they do it extremely. They don’t try to handle it on a mild level. They go (to the) extreme and that is been termed as abuse when you go beyond your limit. So, in such cases, (when) somebody comes around or a visitor (comes) in or a volunteer (comes) in (and) doesn’t know our culture and the extent (to which) we discipline our children. They don’t know the culture and the limit and how we go about it, so, they will look at it as an abuse”, he opined.

Child Labour and Negligence
The General Manager and the caretakers of the home often subjected the inmates to child labour for their personal gain. Some of the children in the home are made to carry concrete blocks or firewood while others are employed to push trucks loaded with sand from the home to clients outside, with the money going to the taskmasters; the General Manager and the caretakers.The home that was supposed to provide some comfort and relief to the disabled and needy kids is gradually turning into a den of maltreatment and neglect. Some of the children, especially the physically challenged, when they soil themselves, could be left with the mess for hours.

Hunger is a daily reality for many here. Children with physical conditions that require that they are spoon-fed are usually left to feed themselves and they end up spilling a chunk of the meal. Volunteers at the home have been asked not to complain about whatever they witness there, because all the incidents are “normal.”

Knowing the gravity of the situation and the consequences of public exposure, the caretakers often subject these kids to thorough interrogations about their interactions with volunteers during the day. This happens at the end of each day when these volunteers have left the facility to return to their various homes.